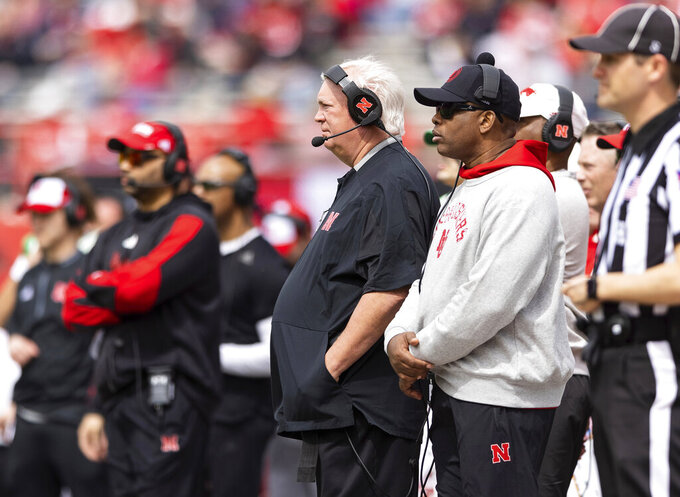 MADISON, Wis. (AP) — During an offseason in which more than one out of every five Football Bowl Subdivision programs changed head coaches, the Big Ten was the lone conference that didn’t see a single move.

But that doesn’t mean the league stood pat.

While all 14 Big Ten members returned their head coaches from last season, nearly half changed offensive coordinators. That has meant extra work for players at those six schools as the Big Ten approaches the end of spring practices.

Vokolek said the Cornhuskers spent much of spring practice going over routes and concepts they learned over the winter. Similar scenes played out at Illinois, Indiana, Michigan, Minnesota and Wisconsin.

How those coordinator moves might impact the offensive schemes at those schools remains uncertain.

“I think you are always evolving,” Minnesota coach P.J. Fleck said. “You are always adapting and you are always tweaking to make things better. You are changing with the times as you continue to go forward.”

The most notable change took place at Michigan, where coach Jim Harbaugh returned for an eighth season after interviewing with the Minnesota Vikings about their open position on signing day with his staff wondering if he was going to stay or go. Offensive coordinator and play-caller Josh Gattis is gone and next season will run Mario Cristobal’s offense at Miami.

Harbaugh promoted from within. He made quarterbacks coach Matt Weiss a co-coordinator alongside Sherrone Moore, who also had the co-coordinator title last season.

While Gattis’ departure was voluntary, most of the other changes came because a head coach wanted a fresh start. Illinois, Indiana, Minnesota and Nebraska all fired their 2021 offensive coordinators.

The other change came at Wisconsin, where Paul Chryst served as his own offensive coordinator last year but now has Baltimore Ravens assistant Bobby Engram filling that role.

Some of these new coordinators have familiarity with their new bosses.

Ciarrocca coordinated Minnesota’s offenses from 2017-19 before leaving for the same position at Penn State. He spent last season as an analyst at West Virginia.

“I love Kirk’s organizational skills,” Fleck said. “I love the relationship he has with the offensive players.”

Engram coached wide receivers on Chryst’s Pitt staff from 2012-13. Chryst and Engram have said Wisconsin’s play-calling will be a collaborative process.

There’s plenty of uncertainty across the Big Ten over how the offenses will look with so many new coordinators. Teams are hesitant to go into specifics about any potential schematic changes.

Players have offered a few clues.

Vokolek noted that Nebraska’s players have been watching Pittsburgh film to see the success Whipple had there with an offense featuring quarterback Kenny Pickett, a potential first-round draft pick.

Nebraska quarterback and Texas transfer Casey Thompson said he chose the Cornhuskers in part because he was excited about working in an offense that combined the philosophies of Whipple and Nebraska head coach Scott Frost.

“Frost kind of recruited me (when he was) at UCF,” Thompson said. “I studied his whole offense when he was at Oregon. I knew what he was about. I started to study Whipple’s offense and watched Kenny Pickett. Then I turned on Nebraska in 2020 and ’21 and saw we had plenty of receivers here to be successful, and that’s what led to my decision.”

Wisconsin quarterback Graham Mertz says the Badgers might not depart much from their traditional run-oriented style but should have enough new elements that fans will notice the difference.

Mertz can’t wait to see how well the new offense works when the season arrives. That feeling is prevalent across Big Ten campuses this spring.