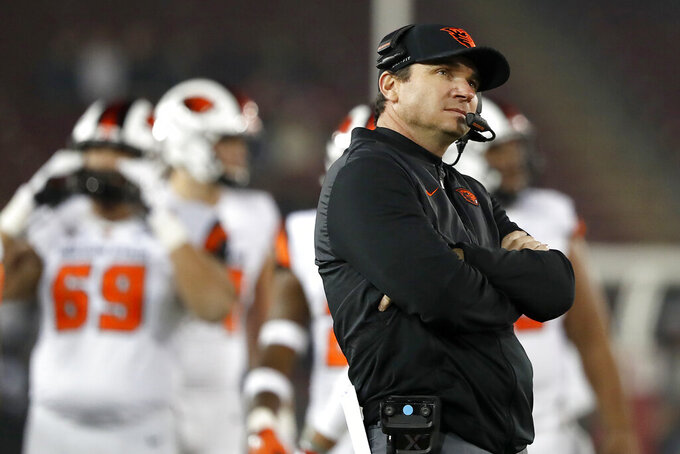 FILE - In this Nov. 10, 2018, file photo, Oregon State head coach Jonathan Smith looks at the scoreboard during a timeout against Stanford in the second half during an NCAA college football game in Stanford, Calif. The Beavers open the season at home against Washington State on Nov. 7. (AP Photo/Tony Avelar, File)

Washington State officially bids goodbye to the Air Raid and ushers in the run-and-shoot when the Cougars open the season at Oregon State on Saturday night.

Mike Leach, who saw success with his Air Raid in Pullman, has moved on to Mississippi State, paving the way for Nick Rolovich to install his own offense.

“We’re definitely focused on that scheme more than anything on that offense,” Oregon State coach Jonathan Smith said. “It’s a tough one to defend. It can move the ball in a lot of ways, spreading people out. They’re willingly running the ball, too, so it’s not 100% pass."

He had the edge because of his experience with the run-and-shoot – an offense he mastered while going undefeated and winning two state championships at Saint Louis, a private Catholic school in Honolulu. Others who have come through the Saint Louis program include Miami Dolphins starter Tua Tagovailoa, Las Vegas Raiders backup Marcus Mariota, former NCAA career passing leader Timmy Chang and ex-Washington State star Jason Gesser.

“Came in obviously with a history in the family of the offense,” Rolovich said. “But he came in, just put in the work, thought he was productive and consistent and was going to give us the best chance to move the ball this Saturday."

On Oregon State's side, Tristan Gebbia will take over now that Jake Luton has moved on to the NFL.

The Beavers surprised many by going 5-7 overall and 4-5 in the conference last season in a three-way tie for second place in the North Division.

Jermar Jefferson ran for a school-record 1,380 yards in 2018 and was named the Pac-12's Freshman of the Year. But he was hampered by injuries last season, though he still managed 685 rushing yards and eight TDs.

“I’d probably say getting more carries out of the backfield, getting more receiving catches, and seeing what I can do in the open field,” Jefferson said about his goals this season.

RETURN OF THE MAX

Washington State running back Max Borghi could see his role expanded under Rolovich, and he already had a big role in the Cougars' offense.

Last season, Borghi collected 1,435 all-purpose yards and 16 total touchdowns, second-most in the league. He rushed for 817 yards and 11 touchdowns while also catching a team-high 86 passes for 597 yards and five scores, and he was the only Power 5 player with as many yards in both categories.

Borghi was named to the preseason All-Pac-12 team Thursday at running back and all-purpose player, the only player to make the first team in two categories.

The Cougars will not use No. 26 as a jersey number this season to honor Bryce Beekman, a starting defensive back who was found dead in his apartment in March from acute intoxication.

“We believe he’s still with us and will have an effect on how we move forward this season. Hopefully, it’s a tribute to him and his family," Rolovich said.

Washington State is just two years removed from the suicide of quarterback Tyler Hilinski in January 2018.

When the two teams met last season in Pullman, the Cougars pulled off a 54-53 victory despite Oregon State's 29 fourth-quarter points. The Beavers had 601 total yards on offense.

Overall, Washington State has a six-game winning streak in the series. The Beavers haven't beat the Cougars at home since 2012.