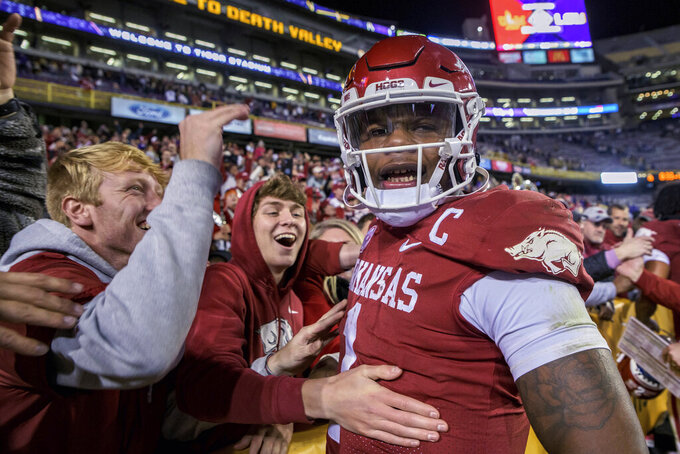 BATON ROUGE, La. (AP) — Arkansas coach Sam Pittman wasn't worried about style points. He was happy to take the Razorbacks' first victory over LSU since 2015 however it came.

Arkansas’ Cam Little kicked a 37-yard field goal in overtime after LSU freshman quarterback Garrett Nussmeier was intercepted by Montaric Brown earlier in the extra period, and the Razorbacks beat the Tigers 16-13 on Saturday night to take home the "Golden Boot" trophy.

“Such a hard-fought game. It was ugly, beautiful and all in between,” Pittman said. “It wasn’t pretty, but we kept fighting. When that ball went through the uprights, it was one of the prettiest things I have ever seen.”

Nussmeier, who's been a backup throughout this season, replaced Max Johnson after two fruitless possessions to start the game and completed 18 of 31 passes for 179 yards and a touchdown. But the promise he showed in spurts was overshadowed by his two interceptions.

Nussmeier's overtime turnover came on a fade pass from the Arkansas 8.

“That is on me,” Nussmeier said. “I have to make the play and be smarter in overtime. I can't turn the ball over.”

After that, Arkansas needed just a field goal to win and set it up with three QB keepers by KJ Jefferson.

Jefferson passed for 142 yards and one touchdown to running back Dominique Johnson, who slipped uncovered behind LSU's defense for a 43-yard touchdown while Jefferson was scrambling after spinning away from blitzing linebacker Damone Clark.

“I knew they were bringing pressure, so I had to make one guy miss,” Jefferson said. “Then I gave Johnson a good ball and he did the rest.”

That scoring play, which tied the game at 10, came after a series of missed opportunities by LSU.

With the Tigers still leading 10-3 in the third quarter, Clark sacked Jefferson on fourth and four from the LSU 38 — a play that had the potential to put LSU in control of the game if the offense could capitalize. But the Tigers stalled at the Arkansas 38 and Cade York's 55-yard field goal attempt fell short.

Jefferson's TD strike came on Arkansas' next series, and it got worse for the Tigers when Nussmeier threw his first interception.

Arkansas (7-3, 3-3 SEC) proceeded to convert a fake field goal for a first down on what would have been 54-yard attempt. Instead, holder Reid Bauer kept the snap and ran around the left end for a 23-yard gain to the LSU 13, setting up Little's 27-yard field goal for a 13-10 Arkansas lead late in the third quarter.

Nussmeier’s lone touchdown pass, from 29 yards out, came when he spun away from blitzing safety Joe Foucha, rolled left and lofted a pass to the back of the end zone, where tight end Jack Bech made a leaping catch and touched a toe down in bounds.

The Tigers were on the brink of widening a 10-3 lead when they marched from their own 44 to the Arkansas 18 in three plays in the second quarter, only to opt for a direct snap to running back Tyrion Davis Price. The play resulted in a lost fumble when Davis-Price was unable to catch the snap.

Orgeron looked furious, yelling demonstratively on the sideline to offensive assistants about the missed opportunity.

“I just didn’t think it was very good for us to put Ty Davis back there in the wildcat; we never did it all year,” Orgeron said of the play called by first-year offensive coordinator Jake Peetz. "It caused a fumble and we could have went up 17-3. I wish I could have that call back.”

If Orgeron feared the mistake would come back to haunt the Tigers, he was right.

“There were a lot of chances that we had to make plays to win this football game,” Orgeron said. “But again, you’ve got to find a way to do it. They did. We didn’t.”

Arkansas: While the offense generally struggled, Jefferson's ability to extend plays multiple times by slipping the grasp of pass rushers allowed the Hogs to ultimately cash in on a stout defensive performance. Jefferson wound up leading Arkansas in rushing with 41 yards on 15 carries.

LSU: LSU has lost six games for the first time since 1999 and is one loss away from its first losing season since that same year — the year before Nick Saban left Michigan State to take over at LSU in 2000.