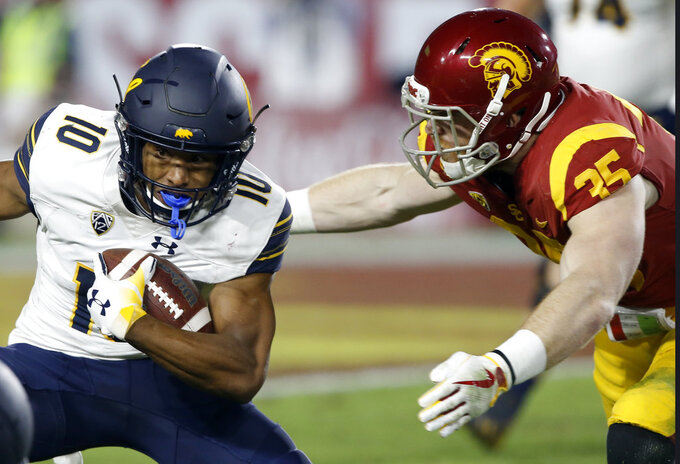 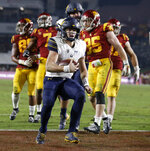 LOS ANGELES (AP) — Patrick Laird took his fourth-and-1 carry deep into Southern California territory with less than two minutes left, and the roars from a hearty contingent of California fans echoed in a mostly silent Coliseum.

The Golden Bears are bowl-eligible and riding high after a landmark victory, while the Trojans have hit yet another low.

Chase Garbers threw a touchdown pass and ran for another score, and Cal snapped its 14-game losing streak against USC with a 15-14 victory Saturday night.

Vic Wharton III made his first TD catch of the year as the Golden Bears (6-4, 3-4 Pac-12) rallied from a 14-point halftime deficit and secured bowl eligibility for just the second time in seven seasons with their first win at the Coliseum in 18 years.

"It means a lot, and I'm so happy for all of our guys," said Laird, a fifth-year senior who has never played in a bowl. "The first goal of our team was to get six wins to make it to a bowl game. It means so much more to do it here, too."

Two programs that appear to be moving in opposite directions kept going their separate ways while Cal beat USC (5-5, 4-4) for the first time since its famed 34-31, triple-overtime victory over the vaunted Trojans in Berkeley in 2003.

The Trojans hadn't lost to the Bears at the Coliseum since 2000, coach Paul Hackett's final season at USC before Pete Carroll took over.

"The streak and all that, we don't really talk about it," said Cal coach Justin Wilcox, the former USC defensive coordinator. "I didn't even know about it until somebody brought it up this week. We're not playing the streak. These guys are competing and playing for each other."

Cal did all of its scoring in an eight-minute span of the third quarter, starting with a safety when a shotgun snap by USC's Toa Lobendahn went 22 yards backward into the end zone. Garbers threw a 29-yard TD pass on the ensuing offensive drive, and he rushed for another score 6 ½ minutes later after Traveon Beck's interception.

J.T. Daniels passed for 180 yards and threw two TD passes to Tyler Vaughns, but the Trojans were shut out in the second half of their third loss in four games.

USC gained just 40 yards after halftime against Cal's sturdy defense while losing at the Coliseum for the second straight game after a 19-game home winning streak through the entire tenure of coach Clay Helton.

"I'm not going to get overemotional and say the ship is sinking," Helton said when asked about the state of his program after three losses in four games and its first five-loss regular season since 2012. "For us right now, we're making too many mistakes across the board. I'm sorry for the 5-5 season, but better days are here to come. ... I believe in our kids. I believe in their ability."

Both defenses were solid early on a chilly night at the Coliseum, but the Trojans appeared to be in good shape for yet another win over their upstate rivals despite failing on a fake field goal in the first quarter.

A few minutes after Vaughns caught a 2-yard TD pass in the second quarter, Ajene Harris stripped Garbers following a 23-yard run. Daniels then hit Vaughns for a 23-yard score.

USC could have had more, but Cal's Luc Bequette stripped the ball from St. Brown at the Cal 10 in the final minute before halftime.

After managing only 69 yards of offense in the first half, the Bears quickly got back in it. After Cal got a safety on that horrific shotgun snap, Garbers promptly threw a 29-yard TD pass down the middle to an unguarded Wharton, who somehow hadn't scored in 10 games as a starting wideout despite leading the Bears in yards receiving.

Garbers had only 30 yards passing all night before that 29-yard scoring throw.

Daniels then threw his first interception to Traveon Beck, and Garbers mounted Cal's go-ahead drive culminating in his 5-yard TD run. Garbers celebrated by raising the Trojans' famed V for Victory gesture — and then turning the "V'' downward.

California: Despite another mediocre offensive game, coach Justin Wilcox has more tangible proof of progress in his second year with this gutsy win in a tough venue. The Bears will go bowling, and they're riding momentum into the Big Game with Stanford next week.

USC: Helton's second game as the Trojans' play-caller was good in stretches, but not nearly good enough. His seat is even hotter now, and it'll be scorching if the Trojans don't beat UCLA to secure bowl eligibility next week before No. 3 Notre Dame visits after Thanksgiving.

USC: At UCLA in the annual crosstown showdown on Nov. 17.