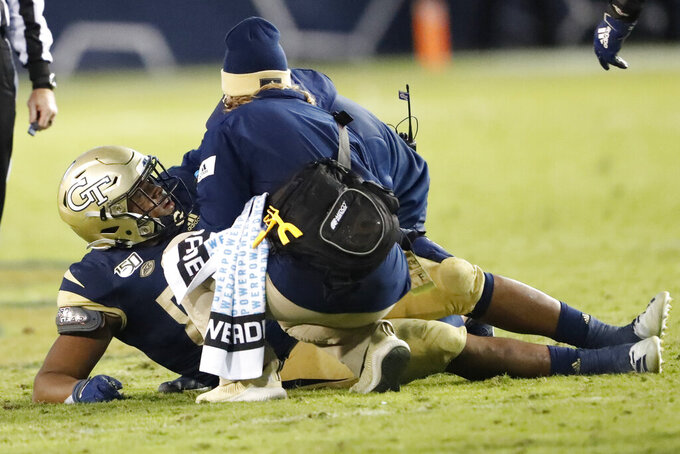 Members of the Georgia Tech training staff check on defensive lineman Antwan Owens (89) after he was injured in the second half of an NCAA college football game against the Pittsburgh Pittsburgh won 20-10. Saturday, Nov. 2, 2019, in Atlanta. (AP Photo/John Bazemore)

ATLANTA (AP) — Geoff Collins refuses to look too far ahead.

He figures that wouldn't be fair to his eight seniors, who have endured a miserable finale to their Georgia Tech careers.

Yet, it's clear the closing month of Collins' first season will essentially serve as an early jump on 2020.

With the Yellow Jackets at 2-6 and one loss away from finishing off whatever faint postseason hopes they may have been clinging to, Collins is focused on player development and a savoring the small victories that don't show up on the scoreboard.

For instance, he spent a good bit of time Tuesday raving about those players who took off in pursuit of a Pittsburgh defender who had scooped up a loose ball after Georgia Tech fumbled just short of a tying touchdown in last weekend's loss to the Panthers. The Yellow Jackets finally chased him down after a return of 79 yards, and the defense knocked Pittsburgh back 10 yards in three plays to force a 49-yard field goal.

Never mind that the kick was good, essentially sealing the Panthers' ugly 20-10 win.

Collins wants that sort of effort to be the hallmark of the program going forward.

"I don't know if six months ago this program could've handled some things that happened to them with the poise, with the class and the resiliency that they showed," Collins said. "We've just got to continue to build on those things. We're really, really close."

That assessment appears way too optimistic, but Collins is doing everything he can to keep his team focused on the day-to-day grind and not the disheartening record.

There are four games still to go, beginning with Saturday's contest at Virginia (6-3, 4-2 Atlantic Coast Conference) before the Yellow Jackets, who are 1-4 in the ACC, close out the regular season with three straight at Bobby Dodd Stadium.

"There are a lot of young guys playing at a high level," Collins said. "There's probably a lot of excitement about that and how we've started playing really well collectively, regardless of the circumstance. But I've got eight seniors. This is the last chance they're going to get to play college football. So my entire focus, every fiber of my being, is invested in making sure their experience is the best experience it can possibly be."

But Collins also pointed out that he spends a great deal of time working with the younger defensive players, the ones that are known as the scout team at most schools but he prefers to call the "developmental" squad.

They give him hope that better days are ahead.

"I'm down there coaching those guys, so I get to be around them, get to coach them, get to put my hands into their development," he said.

Collins knows he has to raise the talent level at Georgia Tech. That means recruiting the sort of players who will fit his schemes on both sides of the line — a particularly daunting task for the pro-style spread offense, which went a totally different direction after more than a decade running the triple-option under former coach Paul Johnson. The Yellow Jackets rank last in the ACC in scoring (17.1 points per game), total yards (299.5), passing yards (141.0) and offensive efficiency.

"We understand the recruiting neighborhood that we're in," Collins said, referring to ACC kingpin and reigning national champion Clemson as well as Southeastern Conference powerhouses such as Georgia, Auburn and Alabama. "But we also understand the great high school coaching that is in our immediate 5-hour radius (and) the tremendous wealth of high school talent that is within our 5-hour radius."

Of the players already on the roster, one who could get a more extended look over the final month is freshman quarterback Jordan Yates.

He was one of the highest-profile recruits of Collins' initial class, a player who was Georgia's Class 7A player of the year as a high school senior.

Yates has only played in one game, which means he could get into three more without losing his eligibility for a redshirt season. In recent weeks, he's been taking a lot of snaps in practice, offensive coordinator Dave Patenaude said.

"He's going to be a really special player. He's got tremendous instincts," Patenaude said. "We would like to get him in there in a game situation, see if he can get his feet wet a little bit, without disturbing the whole flow of the game."