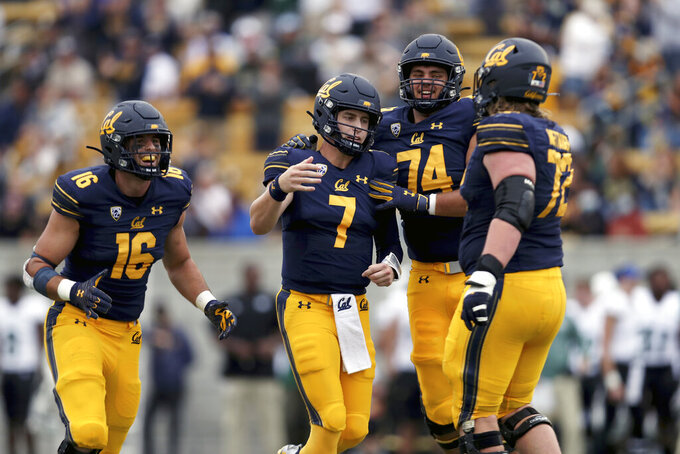 California quarterback Chase Garbers (7) is congratulated by teammates after throwing a touchdown pass against Sacramento State during the first half of an NCAA college football game on Saturday, Sept. 18, 2021, in Berkeley, Calif. (AP Photo/Jed Jacobsohn)

BERKELEY, Calif. (AP) — After opening the season with a couple of tight losses, California coach Justin Wilcox will take any sort of win — even if it was closer than he wanted against a lower-level team.

Chase Garbers threw for 288 yards and two touchdowns, Nikko Remigio returned the second-half kickoff for a score and Cal beat Sacramento State 42-30 Saturday for its first win of the season.

“You never minimize a win,” Wilcox said. “It’s hard winning in college football, regardless of who you’re playing. ... It’s good to get a win. But we all know that we need to be much, much better.”

The Golden Bears (1-2) had lost their first two games of the season to Nevada and TCU in tight contests but handled the FCS-level Hornets (1-2) to avoid their first 0-3 start in a full season since 2001. Cal also lost its first three games in last year's pandemic-abbreviated four-game slate.

Garbers led the Bears to TD drives on their first two possessions of the game on drives capped by 4-yard TD runs from Damien Moore.

Garbers got into the act himself when he connected on a 45-yard TD pass to Jeremiah Hunter late in the first half and a 12-yard touchdown to Trevon Clark in the third. He also ran for a 16-yard score in the fourth.

“Each and every week we have gotten better,” Garbers said about Cal's offense. “We have taken steps forward. As the season goes on and weeks go on, we’ll keep taking that next step.”

Remigio helped Cal take control when he took the opening kickoff of the second half back 99 yards for the score for Cal's longest kickoff return score since Trevor Davis' 100-yarder against Washington State in 2014.

“It wasn’t great. It wasn’t great,” Wilcox said. “It was good enough to win and we always appreciate winning, but we need to be better than that.”

Sacramento State: The Hornets knew they had to take some chances playing up a level and even called for a wide receiver pass off a reverse on the first play from scrimmage that fell incomplete. But they were overmatched and fell to 2-21 against FBS teams over the past 20 years. They weren't helped out by a pair of missed short field goals in the first half from Kyle Sentkowski, who missed from 37 and 20 yards.

“We played hard the whole way,” coach Troy Taylor said. “It was disappointing to give up 14 points on special teams — two missed field goals, a missed 2-point conversion and a Cal kickoff return for a touchdown — and we lose by 12. You just can’t do that against good teams.”

California: There isn't much to take away from a lopsided game against an overmatched opponent other than it could give the Bears some confidence heading into the Pac-12 portion of the schedule.

Wilcox was on crutches on the sideline with his right foot taped after undergoing surgery Tuesday. Cal said Wilcox needed the surgery after re-injuring a previous injury.

“I’m fine. I had an old injury that got worse in the past week,” Wilcox said. “I had to get it fixed real quick. ... It will not impact the team in any way moving forward.”

Cal was also without linebacker Kuony Deng, who had a boot on his right foot after getting hurt last week, and receiver Kekoa Crawford (upper body injury).