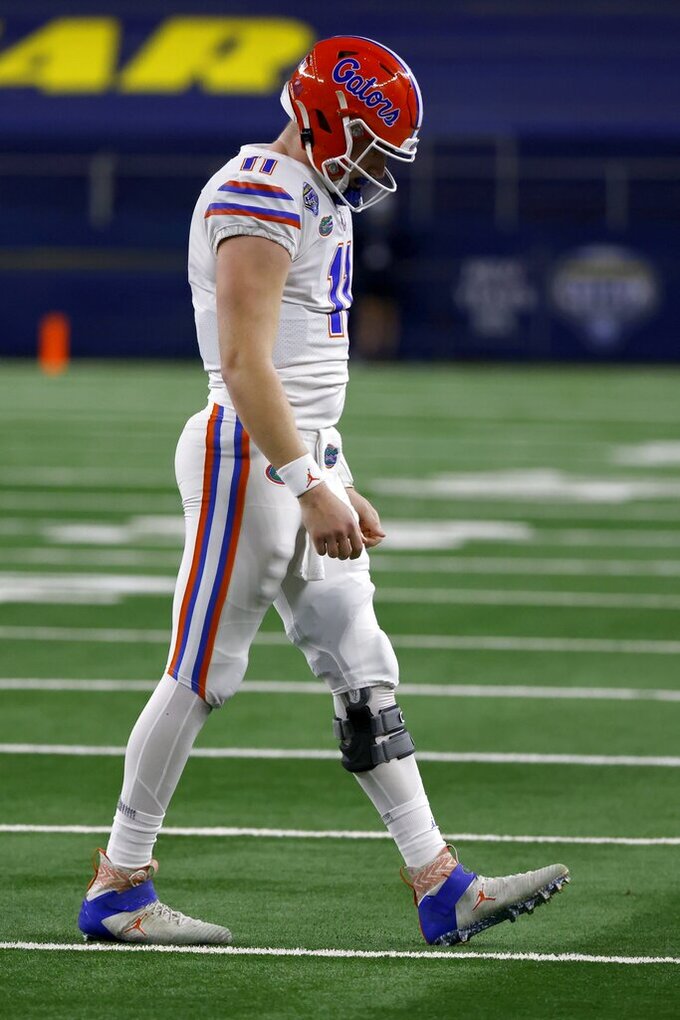 Florida quarterback Kyle Trask walks off the field after throwing a pass that was intercepted by Oklahoma in the end zone during the first half of the Cotton Bowl NCAA college football game in Arlington, Texas, Wednesday, Dec. 30, 2020. (AP Photo/Ron Jenkins)

ARLINGTON, Texas (AP) — This was not the same Florida offense that got the Gators into the SEC championship game, even with Heisman Trophy finalist Kyle Trask presumably playing his final college game.

Trask was missing his top four pass-catchers, and three of his passes in the first quarter of the Cotton Bowl were caught by Oklahoma defenders. Those interceptions contributed to the No. 10 SEC runner-up Gators getting in an early hole on way to a 55-20 loss Wednesday night.

“Obviously it’s difficult because this isn’t the way you want to go out,” Trask said. “But at the same time, you have to look at the big picture. We had a ton of young guys playing and at the end of the day it was about getting them reps and getting them ready for next year by giving them opportunities.”

The Gators (8-4, No. 7 CFP) did get some positive glimpses of what their offense could look like after Trask is gone following his single-season school records with 4,283 passing yards and 43 touchdowns. He didn't play after the opening drive of the second half.

Florida listed 17 players as not being available against the Big 12 champions, and coach Dan Mullen said there were only about 60 scholarship players in uniform. The coach acknowledged that this wasn't really Florida's 2020 team.

It certainly wasn't the same group that lost 52-46 to No. 1 Alabama in the SEC title game and before that had its only two losses on late field goals. No. 5 Texas A&M had a game-ending kick to win at home, and LSU won on a field goal with 23 seconds left in Gainesville.

Dual-threat sophomore quarterback Emory Jones got a lot of action in the Cotton Bowl, including a 1-yard keeper for Florida's first touchdown midway through the second quarter. He ran for 60 yards while completing 8 of 16 passes for 86 yards.

While held to half of their season scoring average, the Gators still managed 521 total yards — 271 passing and 250 rushing. There were 12 different players who caught passes.

“A lot of guys got some really good experience out there for us tonight,” Mullen said. “I think the future is really bright.”

Trask had thrown only five interceptions all season until throwing those three in the first quarter. The Sooners led 14-0 after the senior quarterback's first pick was returned 45 yards by Tre Norwood for a touchdown.

Mullen said the finale doesn't take away from what Trask has done for the Gators after waiting so long to finally get his chance to play. Trask finished 16-of-28 for 158 yards, and was without a TD for the first time in a game he started.

“I couldn't be prouder of him,” Mullen said. “The season he had this year, a special, special year for him.”

The Gators were without All-America tight end Kyle Pitts and receivers Trevon Grimes and Kadarius Toney, who opted out of the Cotton Bowl to start preparing for their pro careers. Sophomore receiver Jacob Copeland didn't make the trip after he tested positive for COVID-19.

That quartet combined to catch 174 passes for 2,778 yards and 34 touchdowns this season.

“Obviously it was a little more challenging.” Trask said. “When you think about it, you’ve got a whole offseason to get timing down with that group of guys. We essentially had two or three days to get timing down since we had so many opt-outs. ... That’s not making an excuse or anything, but the amount of work that goes into this you don’t just flip a switch and you end up in the end zone.”