Harsin on starting QB: 'That has not been decided yet' 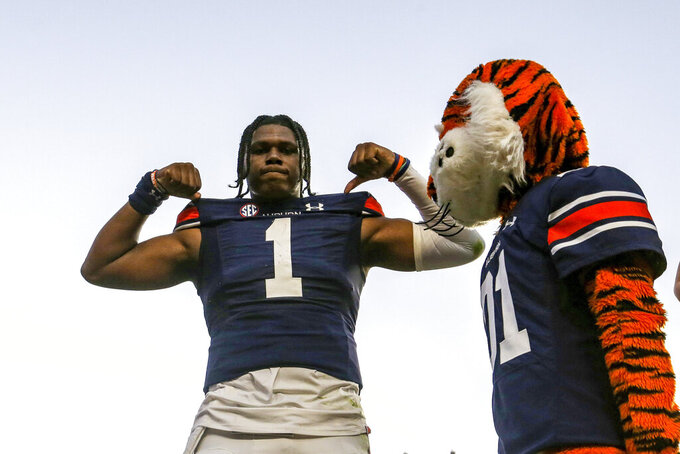 Bryan Harsin isn't tipping his hand on No. 22 Auburn's starting quarterback against LSU.

T.J. Finley, a former LSU starter, staked his claim on the job when he came off the bench to replace third-year starter Bo Nix and ultimately throw for the go-ahead touchdown against Georgia Stat e.

It remains to be seen if Auburn (3-1) will turn to Finley to start the Southeastern Conference opener under Harsin, hoping to jump-start an offense that sputtered in the past two games.

“That has not been decided yet,” Harsin said. “I know depth charts come out. Depth charts, it’s a little bit old-school because so many things change throughout the week and all that. So that stuff for me doesn’t really impact what we’re going to do this week.”

Finley helped Auburn avoid its first-ever loss to a Sun Belt Conference team. He culminated a 98-yard drive with a 10-yard touchdown pass to Shedrick Jackson with 45 seconds left. Then Smoke Monday's interception return for a touchdown capped the 34-24 comeback win.

Finley started five games as a freshman at LSU. He could return to Baton Rouge as Auburn's starter to face his former team.

“It’s going to be amazing. I can’t wait," Finley said. "A lot of players there have supported my decision to come here, so it’s no bad blood with LSU, because they understood the situation I was put in.

"I can’t wait to go back. I told all my teammates, it’s my homecoming, and I look forward to it. Whether I’m starting or not, I just can’t wait to enjoy 100,000 in Tiger Stadium.”

His former coach, LSU's Ed Orgeron, said Finley “made some tremendous plays” against Georgia State. Orgeron made it clear he respects the quarterback's decision to leave.

“T.J. came and talked to me like a man in my office,” the LSU coach said. "He didn’t want to leave. He was crying. LSU meant a lot to him and I knew that. But it was a decision that was made and was best for him, so he left. He looks like he’s doing well, so we wish him the best – not obviously against us.

"But TJ’s always going to be a part of our family.”

Finley completed 9 of 16 passes for 97 yards after coming into the Georgia State game late in the third quarter. Nix finished 13 of 27 for 156 yards and Auburn managed only four field goals in the first half, trailing 24-12.

Harsin said, as always, both quarterbacks need to be ready to go. Nix, a former five-star recruit and son of former Auburn quarterback Patrick Nix, has been Auburn's starter since the opener of his freshman season in 2019.

“Bo’s a hard worker,” the coach said. “He’s a competitor, and he’s that way all the time. It never changes. He’s always been driven like that. And I fully expect that he’s going to get himself ready and have a great week of practice.”