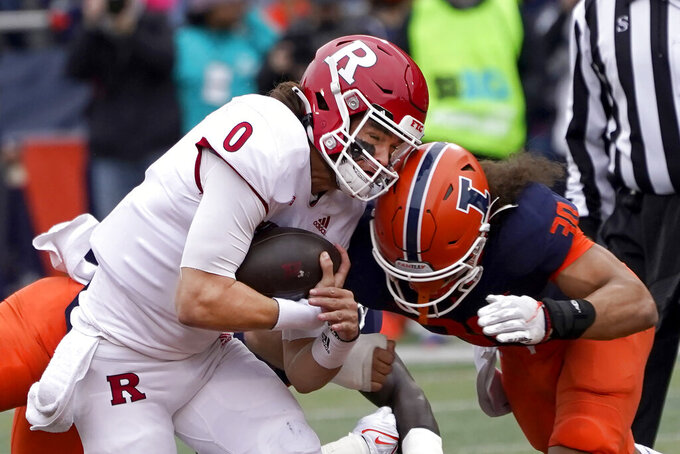 PISCATAWAY, N.J. (AP) — A month into the season, there was a lot of discussion about bowl games happening in Madison, Wisconsin and Piscataway, New Jersey, and it wasn't the same.

Wisconsin had lost three of its first four games and there was concern the Badgers' run of 19 straight bowl berths might be coming to an end.

In early October, Scarlet Knights fans were dreaming wildly about a first bowl berth since 2014. After a 3-0 start for the first time since 2012, Rutgers put on a gritty performance in being edged 20-13 in Ann Anbor by highly regarded and nationally ranked Michigan.

As the teams head into Saturday's game at SHI Stadium in New Jersey, the story lines have changed. Wisconsin (5-3, 3-2 Big Ten) is riding a four-game winning streak and looking at four games against non-ranked teams. A bowl is back in the picture.

Rutgers (4-4, 1-4 ) snapped a four-game losing streak with a win in Illinois last weekend, but it needs at least two wins in its last four games against tougher competition to become bowl-eligible.

“It’s easy to feel good when you’re winning," Wisconsin cornerback Faion Hicks said. “The most important part about it was what type of team were we going to be when our backs were against the wall. I think it’s showing. Our backs were against the wall and we had guys stepping up, the team coming together. After a 1-3 start, it’s easy for a team to kind of just fall apart and give up. But this team keeps punching, man, keeps going.”

Wisconsin has wins over then-No. 25 Purdue and then-No. 9 Iowa each of the past two weeks in ending a string of eight straight losses to Top 25 teams.

After the Michigan game, Rutgers was blown out by Ohio State (52-13) and Michigan State (31-13) and then played a bad game in losing 21-7 at Northwestern. The win over Illinois was impressive, considering the Illini knocked off Penn State the week before. The No. 22 Nittany Lions beat Wisconsin in early September.

“It definitely feels like there is some pressure off, but it feels like there is a need to double down,” Rutgers quarterback Noah Vedral said. “There is an old Kobe Bryant interview from the (NBA) Finals where they won three games and the quote is: ‘The job is not done.’ I think that is the mentality now.”

Wisconsin running back Braelon Allen, a 17-year-old freshman, has run for over 100 yards in each of the Badgers’ past four games. He had 12 carries in the first four games.

Allen has formed an effective running-back tandem with Clemson transfer Chez Mellusi, who has rushed for 740 yards and four touchdowns.

Rutgers coach Greg Schiano is not sure whether wide receiver and returner Aron Cruickshank is going to be able to play against his old team.

Cruickshank, who transferred in 2019, was hurt last month against Michigan State and he has missed the past two games.

“I know he wants to,” Schiano said. "He’s been trying to, but, you know, there’s a difference between want to and physically able, and we’re never going to put a guy out there and risk their health.”

One of the nation's top kickoff returners, Cruickshank has 20 catches for 244 yards and two TDs.

Highly touted freshman quarterback Gavin Wimsatt got his first action last week, replacing an injured Vedral at the end of the third quarter. He completed a 13-yard pass to Bo Melton on a fourth-and-5 from the Illinois 33.

The conversion on Wimsatt's only play led to a go-ahead touchdown. The Owensboro, Kentucky product joined the Scarlet Knights in early September after playing a high school game. He graduated early.

Schiano is not sure whether he plans to redshirt Wimsatt, who can only play in four games to get an extra year. It would be five games if Rutgers went to a bowl game.

“I don’t know exactly what to tell you on it,” Schiano said. "I kind of have an idea what my thinking is. I’m probably not going to share it.”

Wisconsin leads the nation in total defense and is allowing an average of 214.6 yards. Their average of 3.8 yards per play is second to No. 1 Georgia (3.76).

The Badgers also are allowing the fewest yards rushing per game (49.63) and fewest yards per carry (1.73) of any Football Bowl Subdivision team.

Wisconsin had one of the nation’s worst turnover margins for much of the season but has changed that in a big way over the past couple of weeks.

The Badgers have eight takeaways over their last two games after recording just four through their first six. They’ve committed five turnovers during their four-game winning streak after having 12 during the bad start.