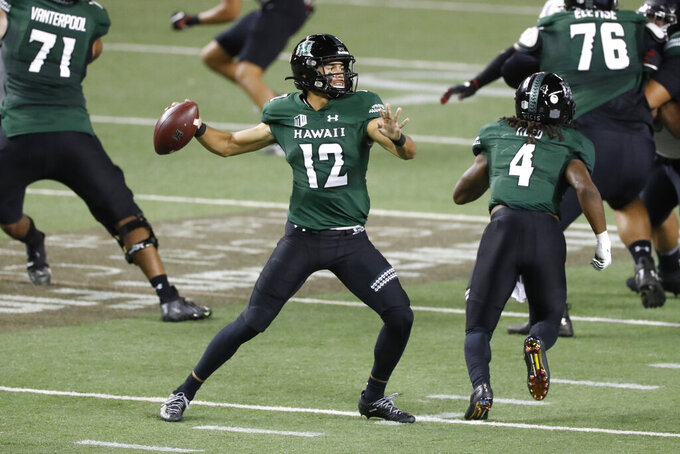 Hawaii quarterback Chevan Cordeiro (12) looks for a receiver during the first half against UNLV in an NCAA college football game Saturday, Dec. 12, 2020, in Honolulu. (AP Photo/Marco Garcia)

Hawaii: Dual threat sophomore quarterback Chevan Cordeiro has thrown for 1,947 yards and 11 touchdowns, with six interceptions, and run for 450 yards and seven scores.

Houston: The Cougars have played only once since mid-November after games against Tulsa and SMU were canceled. They’re coming off a 30-27 loss at Memphis.

Hawaii: The Rainbow Warriors won two of their last three, with the loss coming at home to MWC champion San Jose State.

Hawaii beat Houston 54-48 in three overtimes in the 2003 Hawaii Bowl. There was a brawl at midfield after the game ended.

Hawaii: The Rainbow Warriors are in the New Mexico Bowl for the first time. It’s their third straight postseason appearance and 14th overall.