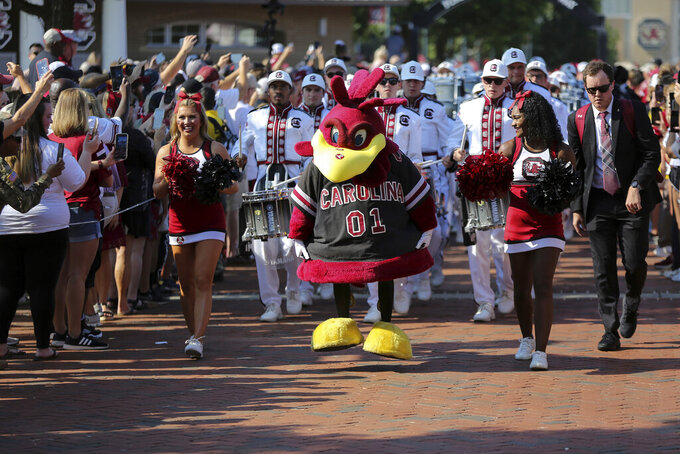 The South Carolina mascot and the marching band lead the Gamecock walk before an NCAA college football game against Georgia on Saturday, Sept. 17, 2022 in Columbia, S.C. (AP Photo/Artie Walker Jr.)

COLUMBIA, S.C. (AP) — South Carolina's home game with South Carolina State has been moved up from Saturday to Thursday night due the approach of Hurricane Ian.

"Due to the potential impact of the hurricane on Columbia and the surrounding area, it is in the best interest of safety to play the game on Thursday rather than Saturday afternoon,” Tanner said in a statement.

South Carolina had spoken with the office of Gov. Henry McMaster and other state officials, state and local law enforcement who routinely help at games. Tanner said he was confident they could safely host the game Thursday night at Williams-Brice Stadium.

A planned reunion of the 2010-2013 football teams coached by Steve Spurrier was postponed.