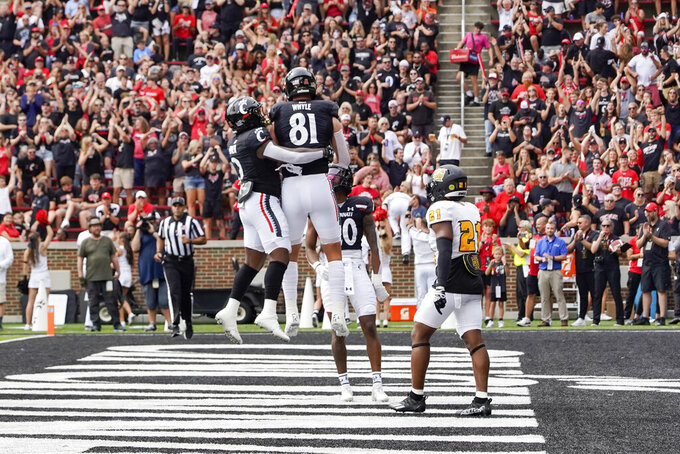 Line: Cincinnati by 16 1/2, according to FanDuel Sportsbook.

The Bearcats are a heavy favorite following two straight wins. If they earn their third straight, Cincinnati could be in position to reclaim an AP Top 25 spot. A season-opening loss at Arkansas sent it tumbling out of the poll. Indiana has won three straight, all with second-half comebacks. But a win Saturday would be the Hoosiers' best of this season, double their victory total from 2021 and give them a 4-0 start for only the third time since 1991.

Indiana run defense vs. Cincinnati RBs Charles McClelland and Corey Kiner. Aside from the slow starts, the Hoosiers' biggest weakness has been their run defense. While Indiana is allowing just 4.2 yards per carry and given up one TD, opponents are running for 186.0 yards per game. McClelland and Kiner, meanwhile, are making up for the loss of NFL-bound players such as QB Desmond Ridder and WR Alec Pierce. They've combined for 341 yards and six TDs.

Indiana: QB Connor Bazelak. He's been terrific in the fourth quarter but not nearly as efficient in the first three. While the defense has played relatively well these first three weeks, if the Hoosiers really want to make a statement on the road, they need Bazelak and the offense to play more consistently.

Cincinnati: QB Ben Bryant. The fifth-year senior struggled early in his Cincinnati debut but has been almost flawless the past two weeks, going 42 of 54 with 538 yards, four TDs and one interception over the past two weeks. Indiana may pose the biggest defensive test he's had since Arkansas.

Indiana has gone 14-1 against non-conference opponents in the regular season under coach Tom Allen. The only loss came last season to the Bearcats. ... Cincinnati has won a school record 28 consecutive home games since losing to Temple in November 2017. Only one FBS team — Clemson (36) — has a longer active streak. ... The Hoosiers have won their last three road games in the series dating to a loss in 1935. ... Bearcats LB Ivan Pace Jr. was a tackling machine at Miami (Ohio) in 2021 and hasn't slowed down at his new school. He has 31 tackles, 6 1/2 tackles for loss and two sacks in three games. ... Hoosiers K Charles Campbell made the decisive 51-yard field goal in overtime last week and needs three points to pass All-American RB Vaughn Dunbar (150) on the school’s career scoring list.