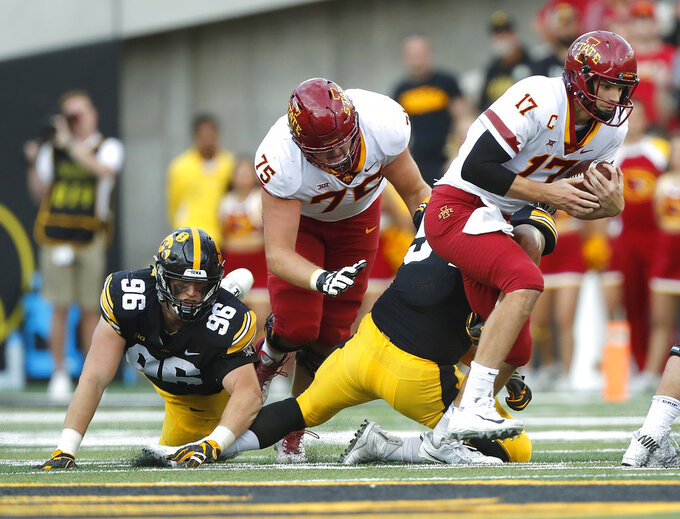 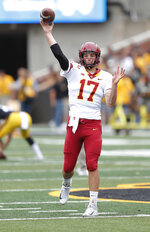 Iowa State quarterback Kyle Kempt is considered "day-to-day" with a knee injury and it is unknown whether he will play Saturday against No. 5 Oklahoma in the Big 12 opener for both teams.

Coach Matt Campbell said Kempt injured the MCL in his left knee in the fourth quarter of Saturday's 13-3 loss to Iowa. But Campbell also said Monday the Cyclones (0-1) "dodged a big bullet" because Kempt's injury is not believed to be a long-term one.

"I think we're all (breathing a) deep sigh of relief here," Campbell said. "His availability for this week I think is still up in question a little bit. But I think it's a lot better than what we thought the outcome was going to be."

Sophomore Zeb Noland would be the starter if Kempt can't go. Noland was 4-of-10 passing for 43 yards against the Hawkeyes in relief of Kempt.

Kempt made his first career start last season against the Sooners on the road and threw for 343 yards and three touchdowns, leading the Cyclones to the first road win over a top-five team in school history. He went on to throw 15 TD passes against just three picks, and finished 5-3 as a starter.

Kempt struggled a bit against Iowa's defense last weekend. He finished 15 of 21 for just 126 yards before getting hurt in the second half.

Campbell said Kempt will let him know by the middle of the week whether he thinks he can go against the Sooners (2-0), who beat UCLA 49-21 over the weekend.

"He's got to be confident," he said. "That's the biggest thing. I trust him as much as anybody in knowing where he's at."

Beyond Noland, the Cyclones also have a trio of freshmen quarterbacks in Re-al Mitchell, Brock Purdy and Devon Moore. Mitchell might be the first of those rookies to see the field because of his dual-threat ability, but Iowa State hasn't set a depth chart beyond Kempt and Noland.

"We feel really confident in that room right now," Campbell said. "You have to, in today's world of football, have multiple (options) at that position, and it's hard to do because everybody wants to play."