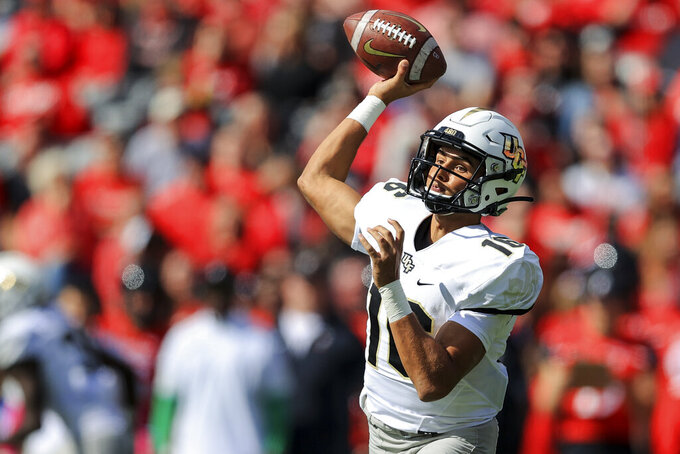 UCF quarterback Mikey Keene (16) throws a pass during the first half of an NCAA college football game against Cincinnati, Saturday, Oct. 16, 2021, in Cincinnati. (AP Photo/Aaron Doster)

CINCINNATI (AP) — Jerome Ford rushed for a career-high 189 yards and four touchdowns, helping No. 3 Cincinnati roll past UCF 56-21 on Saturday.

Desmond Ridder passed for 140 yards and a touchdown as the Bearcats (6-0, 2-0 AAC) extended the nation's second-longest home winning streak to 24 games.

It was first time in school history that Cincinnati scored 50 or more points in consecutive games.

“The offensive line was the highlight of the day,” Ford said. “It's the physical runs that took the heart from the defense. Tempo was the big thing this week. We wanted to take the pressure off Des.”

The all-time series was tied 3-3 coming in, with the Bearcats winning the previous two meetings by a combined six points. Saturday’s game wasn’t that close. It was just four seasons ago that UCF beat the Bearcats at Nippert Stadium by a similar score, 51-23.

“This is a far cry from where we were five years ago,” said Bearcats head coach Luke Fickell. “The guys that are still here turned the culture around.”

Cincinnati's special teams made the first big play when Josh Whyle partially blocked a punt to give the Bearcats the ball at the UCF 38. That led to a 1-yard TD run by Ford to put them ahead 7-0.

Ridder, who completed just six of his first 12 passes, hooked up with Alec Pierce in the back corner of the end zone for a 19-yard TD that put the Bearcats ahead 21-0 in the second quarter.

“If you put a ball within a six or seven-foot radius, that kid is going to go up and get it,” Ridder said of Pierce.

The Bearcats didn't need to rely on Ridder and the passing game on Saturday, not with Ford gaining big chunks of yardage.

Ford, who ran for a then-career high 149 yards in last week's win over Temple, sprinted 79 yards untouched for his third TD run to make it 28-0.

“He makes my job a whole lot easier,” Ridder said.

The 79-yard run matched his career-long against Georgia in last year's Peach Bowl. Ford is the first Bearcats player with four rushing touchdowns since Isaiah Pead in 2010.

“He just keeps getting stronger and stronger,” Fickell said. “He hasn’t had to carry it 30 times. He’s going to be fresh the last half of the season.”

Freshman Mikey Keene, who became UCF's starting quarterback after Dillon Gabriel was lost for the season with a broken clavicle, passed for 141 yards and a touchdown with two interceptions for the Knights (3-3, 1-2).

“We couldn’t run the football, we have a true freshman quarterback, we had to get him some help,” said UCF head coach Gus Malzhan. "Cincinnati is as advertised. They can play with any team in the country. They could win the whole thing.”

UCF: The Knights haven't been able to overcome a myriad of injuries. In addition to Gabriel, they also were without junior defensive tackle Kalia Davis, who suffered a season-ending knee injury last week. Running backs R.J. Harvey and Isaiah Bowser and receiver Jaylon Robinson also are out.

Cincinnati: Coach Luke Fickell says he doesn't care about style points, but with no marquee games left on the schedule, the Bearcats need to keep winning impressively and maybe get help from other teams if they are going to become the first team outside the Power Five to reach the College Football Playoff.

Bearcats opponents often avoid throwing to projected NFL draft pick Ahmad Gardner's side of the field. When UCF threw to Coby Bryant's side in the third quarter, the Bearcats senior corner made them pay with a 74-yard interception return for a touchdown, the first of his career. “I studied the film, then trusted my instincts,” Bryant said. “I don't doubt my speed. Once I caught it, I knew I was gone.”

Cincinnati's No. 3 ranking already is its highest ever. The Bearcats moved up two spots last week following losses by Penn State and Alabama. Their previous best was a No. 4 ranking in 2009 under Brian Kelly.

Cincinnati: Plays at Navy on Oct. 23.