Kansas college agrees to outside probe after player's death 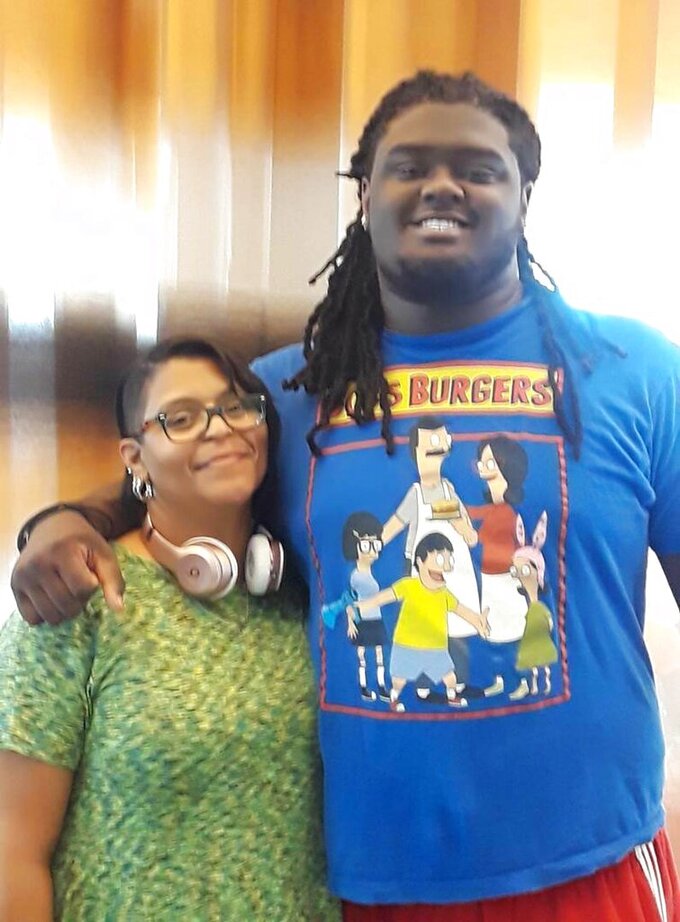 In this undated photo provided by Joanne Atkins-Ingram, is of her and her son Braeden Bradforth. A Kansas community college, Garden City Community College, has agreed under mounting pressure to an independent investigation into the heatstroke death of football player Bradforth last year who collapsed after the first day of conditioning practice. Trustees for the college voted Tuesday evening to authorize the outside probe into the death of the 19-year-old Bradforth of Neptune, New Jersey. He was found unconscious outside his dorm room on Aug. 1 after the practice and died later that night at a hospital. (Courtesy Joanne Atkins-Ingram via AP)

WICHITA, Kan. (AP) — A Kansas community college agreed under mounting pressure to an independent investigation into the heatstroke death last year of a football player who collapsed after the first day of conditioning practice.

Trustees for Garden City Community College voted Tuesday evening to authorize the outside probe into the death of 19-year-old Braeden Bradforth of Neptune, New Jersey. He was found unconscious outside his dorm room on Aug. 1 after practice and died that night at a hospital.

"I am hoping that this will finally let me know my son's last moments," his mother, Joanne Atkins-Ingram, said Wednesday in phone interview from New Jersey. "And I am hoping that through this investigation they will find out exactly what went wrong and how to correct it appropriately — and to make sure that whatever changes need to be made, will be made."

The trustees' move comes just two weeks after New Jersey's 12-member U.S. House delegation called for an independent investigation into Bradforth's death. His mother and her attorney also were pushing for the probe, and had expressed concerns about the accuracy and thoroughness of an internal review.

"I was elated the school is finally doing the right thing and hopefully it will provide Joanne the answers she has been waiting for," said Jill Greene, the mother's attorney in New Jersey.

A summary that the college released this month on its internal investigation said ample water was available to the players. But Greene said players have told her and media outlets that they weren't allowed to drink water during the conditioning drills.

The college has declined to respond to the players allegations, citing possible litigation.

Jeff Simms, who was the head coach at Garden City Community College when Bradforth died, has since been hired as head coach at Missouri Southern State University.

Garden City Community College said in an email Wednesday that the board authorized its president, Ryan Ruda, and college attorney Randy Grisell to begin the process of retaining outside counsel to conduct an investigation. The board put a limit of $100,000 on the cost.

In a subsequent statement Wednesday evening, the college said the internal review served its intended purpose to gather information about the death, and was the most appropriate course of action at the beginning of the process. It said the decision to authorize the external review is the "most logical sequential step in the process."

"An external investigation may be able to provide the answers that are still sought by Braeden's family and others, and it may also serve to confirm the findings of the GCCC internal review," the college said.

Greene said New Jersey Republican Rep. Chris Smith was "instrumental" in making the investigation happen. She said about a dozen Kansas politicians whom she contacted never returned her messages.

"After many months of tirelessly fighting for answers on what happened to her son, Joanne Atkins-Ingram has finally been promised an objective, professional probe — and the information any grieving mother deserves," Smith said in an emailed statement.

"If it is properly done, this investigation could save lives in the future by helping prevent heat stroke deaths through education on best practices," he added.

The college said in its summary that it has taken several steps as a result of its internal review, including hiring an additional trainer and a conditioning coach, training all coaches in CPR and first aid, and developing a protocol to recognize and treat heat-related illnesses.