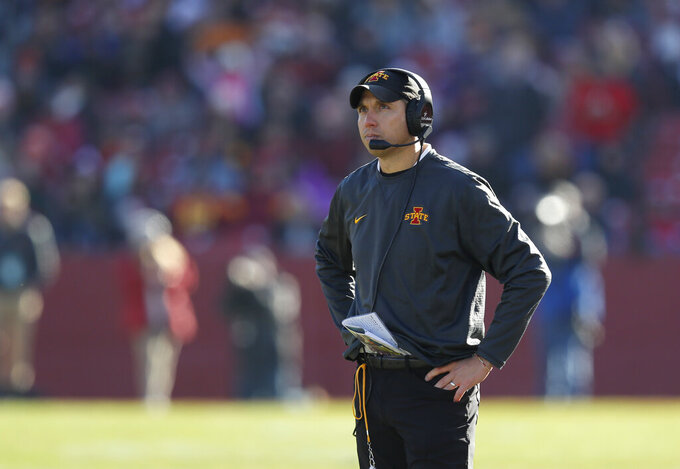 AMES, Iowa (AP) — Iowa State can achieve another milestone in the Matt Campbell era on Saturday, but the opportunity comes with a complication.

The Cyclones (7-4, 5-3 Big 12) visit longtime nemesis Kansas State with a chance to win eight regular-season games for the second straight year, something that has been done only once in school history and that was more than 40 years ago.

Iowa State posted three straight eight-win regular seasons under Earle Bruce from 1976-78. There have been only two since -- 9-3 under Dan McCarney in 2000 and last year, when Iowa State went 8-4 before losing to Washington State in the Alamo Bowl.

But to match that figure this year the Cyclones will have to beat a team that has been a constant source of frustration. Over the last 12 years, Iowa State has more victories over Texas (3) than it does Kansas State (1).

Before winning at home last year, the Cyclones had lost 10 straight to the Wildcats (7-4, 4-4), the only team that has defeated Oklahoma this season. Iowa State hasn't won in Manhattan since 2005, when ISU's current quarterback, Brock Purdy, was just starting grade school.

"It's a huge challenge for our football team," Campbell said Tuesday.

But one that comes with the possibility of a significant reward, though Campbell says he's more concerned with continuing the progress that got the Cyclones to this point than with an actual number. When he took over in 2016, Iowa State was coming off a 3-9 season that ended with four straight losses.

"I think one of the things that's been really fun to watch is us continuing to pound away at how to win here at Iowa State, how do we become successful and how do we sustain that success," he said. "Are we there yet? No. Are we getting a lot closer to where we want to be? I think you see it, you feel it. Even this season, I think it's been a season we have grown immensely.

"I said before the season started, there were more changes that happened in the last six months in the culture aspect within our walls than I've ever been around. To me that's way more important than say, what's the record, what's the scoreboard tell you."

"We had eight last year and you're always looking to improve, so we'd like to get eight this year and finish it out with nine in the bowl game," offensive tackle Julian Good-Jones said. "So that's definitely a goal we have, but we have to handle K-State this week."

MILESTONE START: Good-Jones will set a school record on Saturday when he starts his 49th consecutive game. He made his first start against Iowa in the second game of the 2016 season and hasn't missed one since.

Campbell says it has been a combination of Good-Jones building himself up physically to avoid injury and his ability to handle position changes. He played center and guard before moving to tackle last season.

"It takes a real intelligent young man to have the ability to do what he's done," Campbell said.

KOLAR LEFT OUT: Campbell is disappointed that Charlie Kolar was not named one of the three finalists for the Mackey Award, which goes to the nation's top tight end.

Kolar, a sophomore, has emerged as a star this season and a reliable target in key situations. He has caught 47 passes for 649 yards and leads the team with seven touchdown receptions.

"I really don't know how you select those," Campbell said. "It's too bad, but the reality of it is we think the best tight end in the country resides right here in Ames, Iowa. And you know what, I think Charlie would take Coach Campbell's blessing (more) than he would some voter."

OFFENSIVE OUTBURST: Iowa State already has set a school record with 51 touchdowns this season and is on pace to break records for points and total yards. The reason for this outburst?

Purdy has broken or tied 18 school records so far, including season marks for passing yards (3,575), touchdown passes (26) and total offense (3,843). He also has run for eight touchdowns.

"The kid is an ultimate competitor," Campbell said. "He wants to be great. He demands the best from himself."