The Latest: South Carolina to have full house for football 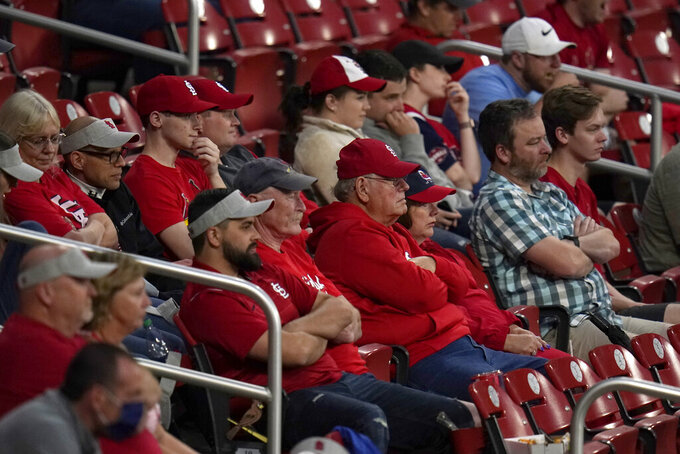 Fans watch a baseball game between the St. Louis Cardinals and the Pittsburgh Pirates Tuesday, May 18, 2021, in St. Louis. The Cardinals have significantly loosened their COVID-19 guidelines, saying fully vaccinated fans attending games at Busch Stadium will no longer be required to wear masks inside the ballpark. (AP Photo/Jeff Roberson)

South Carolina is opening to full capacity at Williams-Brice Stadium next football season.

The school’s athletic department says it plans for 100% capacity in the fall, including traditional tailgating in areas around the 77,559-seat facility. Masks will not be required for entrance going forward.

The school limited attendance last season due to the COVID-19 pandemic to about 20,000 fans per game. Masks and social distancing were required for entrance. But athletic director Ray Tanner says those attending football games next season can “enjoy all of the game day traditions as in previous years.”

The St. Louis Cardinals plan to expand to full capacity at Busch Stadium for the remainder of 2021 season beginning June 14 against the Miami Marlins.

In addition, season ticket holders will be able to access their normal seats for the remainder of the season.

The team also is expanding capacity beginning with a weekend series against the Cubs in May, roughly doubling it to allow around 30,000 fans. Total capacity is 45,538.

COVID-19 protocols remain in place for the season, including mobile-only ticketing and cashless transactions. Bags are not permitted.

Bellator will allow fans for the June 11 MMA card at the Mohegan Sun Arena in Uncasville, Connecticut.

Bellator will have fans for a domestic card for the first time since March of last year when Douglas Lima fights Yaroslav Amosov in the main event for the welterweight championship. Bellator says fans also will be allowed for the June 25 card, also at Mohegan Sun. Both events will be televised on Showtime.

The MMA promotion did not specify a number of fans allowed.

The company ran 16 shows during the pandemic at Mohegan Sun Arena and also had three events overseas. Bellator was the first major MMA promotion to hold an event in France.

The NCAA has announced it will let local authorities decide whether there will be limits on attendance at venues for the national baseball and softball tournaments.

Masks and physical distancing also will not be required unless mandated by local health authorities. The guidance is subject to change based on emerging trends and science around COVID-19.

The NCAA last month set fan capacity at 50% for its outdoor spring championships and Division I fall championships being held in the spring.

The Miami Marlins will remove restrictions on attendance starting July 5, when social distancing requirements will be lifted and open seating restored, the team said Wednesday.

Because of the coronavirus pandemic, crowds in Miami this season have been limited to about 25% of capacity, or a maximum of about 9,300 spectators in the Marlins’ 37,446-seat ballpark.

Beginning Friday, fans will not be required to wear protective masks, but those who haven’t been vaccinated are encouraged to adhere to mask recommendations from the CDC. A mandatory mask policy for event staff will continue.

Social distancing between seat pods for fans will continue through June.

The St. Louis Blues have reached out to the National Hockey League in regard to virus testing ahead of Game 2 of their best-of-seven series with the top-seeded Colorado Avalanche.

In a statement issued Wednesday, Blues president of hockey operations & general manager Doug Armstrong said: “We have discovered discrepancies in COVID test results relating to multiple players. We have been in touch with and are working with the League to address these discrepancies with additional testing and expect to have further information later.”

A league spokesman said to expect an update Wednesday.