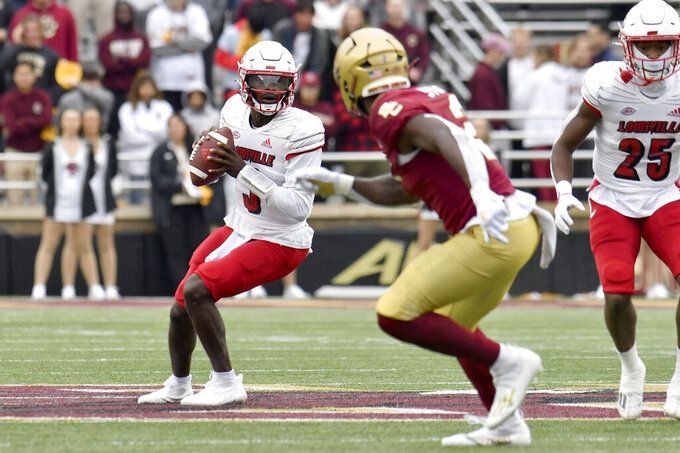 The fifth-year senior ran for three touchdowns and threw for another before finishing the game, a 34-33 defeat, on the sideline. He was removed for one play in the third quarter after taking a hit to the head from BC defensive back Jaylen Blackwell, who was penalized for targeting. Cunningham played two more series before being replaced by Brock Domann.

Satterfield said Tuesday that Cunningham told team doctors that he “felt a little different” after taking another hit later and was pulled from the game.

“His status now is day to day and it’ll be determined by our doctors what they allow him to do,” Satterfield said during his weekly news conference, which came ahead of Saturday’s ACC game at Virginia. “If he’s able to go, then obviously he’ll go. But if they say he’s not ready, then he won’t go.”

Cunningham was injured two days after Miami Dolphins quarterback Tua Tagovailoa suffered a concussion, laying on the turf with his hands and fingers frozen upward after being slammed backward to the turf in a game against the Cincinnati Bengals. Tagovailoa had experienced concussion-like symptoms after a hit four days earlier against the Buffalo Bills but was cleared to return, raising questions about the NFL's handling of such injuries.

Satterfield said Cunningham told him he felt fine after sitting out following the first hit. Team doctors told him that a second hard tackle left his quarterback dizzy and that he probably sustained concussion-like symptoms.

The coach indicated that he would heed medical advice on Cunningham’s availability.

“Our doctors do a fabulous job,” Satterfield said. “Anytime there’s any kind of injury, the doctors are going to give the go-ahead to play or not play. It’s not any coach’s or any training staff (decision) when it comes to that, those type of injuries.”

Cunningham recently became the sixth quarterback in NCAA history to exceed 9,000 yards passing and 3,000 rushing in a career.