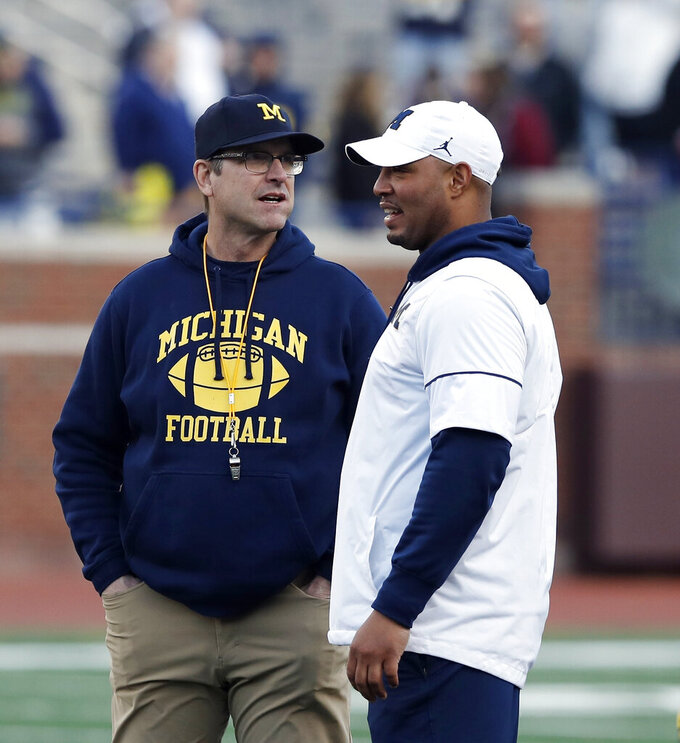 FILE- In this April 13, 2019, file photo Michigan head coach Jim Harbaugh, left, and offensive coordinator Josh Gattis talk during the team's annual spring NCAA college football game in Ann Arbor, Mich. Harbaugh seems to be set up for success at Michigan in his fifth season, leading a program that is a popular choice to win the Big Ten. (AP Photo/Carlos Osorio, File)

ANN ARBOR, Mich. (AP) — Jim Harbaugh lashed out Tuesday night at Cincinnati coach Luke Fickell, who said Michigan did not support a transfer's attempt to immediately play for the Bearcats.

Harbaugh said he told Fickell months ago he wouldn't lie about what he knew regarding the transfer of James Hudson.

"They can say they didn't undermine it, but they didn't work to help the kid out," Fickell said in the story published Tuesday. "All the power is in the hands of the school a player is leaving. If they want to help, they can help them become eligible."

"Michigan did not block the waiver," said Harbaugh, adding it was the NCAA's decision to deny Hudson's request.

The NCAA does not comment on specific waiver cases and rarely do schools, even when an athlete waives protection under federal privacy laws.

Hudson, a seldom-used offensive lineman, transferred to Cincinnati last year. The NCAA denied his waiver request in the spring to be eligible this season. Hudson posted on Twitter that mental health prompted his transfer, but his request was denied because he did not reveal the issues at Michigan.

Hudson, who is from Toledo, Ohio, signed to play at Michigan in 2017 and he redshirted as a freshman and played sparingly as a sophomore.

Harbaugh said Fickell called him in March, trying to coach him what to say about the events leading up to Hudson's transfer.

"I told him, 'I'm not going to lie,'" Harbaugh recalled telling Fickell said.

Harbaugh said he talked to Fickell about Hudson switching from offensive to defensive line.

As Harbaugh has often said this summer, he believes all college athletes should be able to transfer once without sitting out the following season.

"That's how I personally feel about this issue," he said.