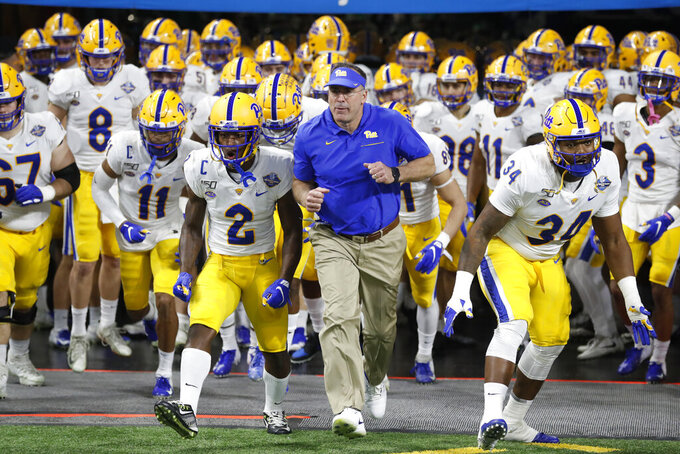 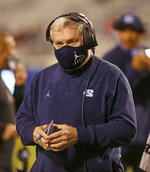 PITTSBURGH (AP) — Tre Tipton felt off. Yet the Pittsburgh wide receiver spent years wrestling with his inner demons in silence, assuming it was up to him to sort things out on his own because, well, that's just how things worked.

“We have to be the manliest of men,” Tipton said. “From a men’s perspective, it hasn’t been easy. You’re expected to brush the dirt off.”

Only the dirt — the kind you can't get at with soap and water — lingered during Tipton's roller-coaster career, one that's included three different seasons being cut short by injury. For all the rehabilitation Tipton put his body through during his six years with the program, he struggled to find peace.

Enter Kristen Mackel. The lead clinical counselor for Pitt athletics, Mackel kept gently reaching out to Tipton. She'd shoot him a text to ask him how he was doing. She repeatedly reminded him that her door — or at least her computer screen for a Zoom call — was always open. Last spring, as the tentacles of COVID-19 pandemic spread, upending the normal routine for Tipton and the other 400-plus Pitt athletes, Tipton finally relented.

“Once we sat down and talked, it gave me a sense of relief,” Tipton said.

Months later after countless talks, Tipton said Mackel “knows me better than most people know me. I used to work so hard to keep people out. She helped me learn to open myself up.”

The relationship between Tipton and Mackel is one that's become commonplace in athletic departments across the Atlantic Coast Conference and the country as the stakeholders involved put a larger emphasis on the vital role mental health care plays in the development of athletes on and off the field.

The ACC hosted a Mental Health and Wellness Summit in 2019 in Durham, North Carolina. A second one was planned for last May before being scuttled by the pandemic. The conference offered a webinar instead focused on helping college athletes find ways to deal with the ripple effects of COVID-19. More than 400 tuned in.

“Our conference will continue to take a leadership role as now, more than ever, it’s critical to ensure our student-athletes, coaches and administrators have available resources and educational materials as we face unprecedented challenges in college athletics," ACC Commissioner John Swofford said.

Pitt athletic director Heather Lyke was way ahead of him. For years athletes had outpatient services available to them through Western Psychiatric Hospital, located halfway up “Cardiac Hill” in the middle of campus. Yet Lyke made the decision two years ago to embed mental health professionals in the athletic department. She gave Mackel and Leigh Skvarla offices at the nearby Petersen Events Center, home of the men's and women's basketball program and a hub for most of the school's athletes.

Lyke's reasoning was two-fold. By having the counselors working out of the events center, it would remove the “taboo" of walking into Western Psych while also giving players dedicated professionals to work with instead of whoever happened to be available each day.

“It was about consistency,” Lyke said. “It was about eliminating the stigma and really evolving our athletic department. We’re not on the cutting edge yet ... (but) you’re kind of behind if you’re not thinking about the mental well being of student-athletes.”

Mackel and Skvarla are available practically 24/7. The combination of the ripple effects of COVID-19 on the college experience along with the increased focus on social justice and systemic racism and a heated presidential election has created a perfect storm of sorts for athletes trying to navigate turbulent waters while also competing at the highest levels of amateur sports.

Mackel praised football coach Pat Narduzzi for taking the lead when the staff became embedded. He brought Mackel into the team facility, stressed to his players the services she provided, and made it a point to try and get the Panthers as comfortable around her as possible, even if that meant they sometimes talked to her instead.

“I hope they come in my office to talk about certain situations and they do and we try to get them as much support as we can on the outside that’s a professional because I’m no pro,” Narduzzi said. “But Kristen has done an outstanding job during her time here. She’s Zoomed in with us during the COVID time. She’s our mental coach. I’m the head coach. She’s the mental coach.”

Still, the job of Narduzzi and his brethren across the ACC is different than the one his father had while coaching at Youngstown State in the 1970s and 1980s.

“Many years ago, we didn't say much about it (mental health) at all,” North Carolina coach Mack Brown said.

Now, it's a frequent topic. Last weekend Brown brought in a counselor to help the Tar Heels prepare for the potential emotional election. Two years ago when the son of a friend took his own life, Brown gave an impassioned speech to his players about the need to come forward if they are hurting. In the locker room, linebacker Jake Lawler was listening.

“After that meeting, Jake Lawler came in and said, ‘Coach, you saved my life,'” Brown said. “He said, 'I was the guy sitting there thinking of doing something bad and you woke me up.’ It just reinforces the fact that you never know.”

Mackel said the efforts of professional athletes have contributed to erasing the antiquated notion that getting help is somehow a sign of weakness, but the battle is not over. It took Tipton what he called a series of “baby steps" before he drew up the courage to approach Mackel. He's quickly become an advocate for the self-care talking to a counselor provides.

“It allows (athletes) to know it’s OK to cry, but it’s not OK to quit," Tipton said. “But to do that, you’ve got to open the space and it's hard to get people to open up.”

Tipton is trying. Last year he started a program called Living Out Victoriously Everyday (L.O.V.E.) that focuses on “mental prosperity.” What began as a small project with a friend has become a calling of sorts. He envisions himself as a motivational speaker after earning a graduate degree in social work. He remains a work in progress, but points to his bond with Mackel as a crucial step.

“If it wasn’t for her,” Tipton said, “I definitely don’t know where my mentality would be.”