Mora says UConn was the uphill job he wanted to take 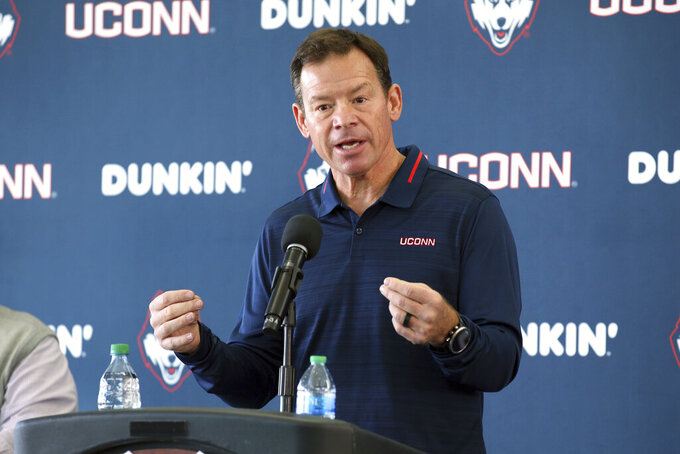 Jim Mora speaks with the media during a press conference announcing him as the new head coach of Connecticut University football, Saturday, Nov. 27, 2021, in East Hartford, Conn. (AP Photo/Stew Milne)

While many things about the former UCLA and NFL coach impressed Benedict, what may have sealed the deal is a “really huge book” Mora showed him, in which the 60-year-old had chronicled every mistake he believes he's made on the sideline and wrote down what he should have done instead.

Mora insists the book isn't that big, and he notes he also journals about successes and good ideas. He said the UConn job, which he officially started on Sunday, will give him the ability to put everything he's learned into one more football challenge.

He also revealed that he reached out to UConn, not the other way around, after the school parted ways with Randy Edsall early in the season.

“This was the job I wanted,” he said.

UConn certainly presents a challenge. The Huskies reached the Fiesta Bowl after the 2010 season but have gone 31-90 since. They have failed to post a single winning season and have lost 36 of their last 37 (including 14 straight) games against Football Bowl Subdivision opponents, while moving from the American Athletic Conference to independent status.

Mora compared his new job to his favorite hobbies, which include hiking or bicycling up mountains and “skinning" — wrapping skis in an animal skin, then walking up a slope and skiing back down in the dark, with just a headlamp to light the way.

Mora already has held a team meeting and announced several coaching hires and his decision not to retain anyone from Edsall's staff.

He has been recruiting and reaching out to Connecticut high school coaches, insisting that keeping top prospects in state will be a priority.

He's also spent the last few weeks assessing the talent on the current roster. He said he'll be giving each player an honest — sometimes brutally honest — indication of the role he sees for them going forward.

He said he will use the transfer portal to help build next year's team, but he wants to create a foundation for the future through the recruiting process.

He's not setting a timeline for succeeding at UConn.

“I’ll just say every single day we’re going to take another step toward being better," he said.