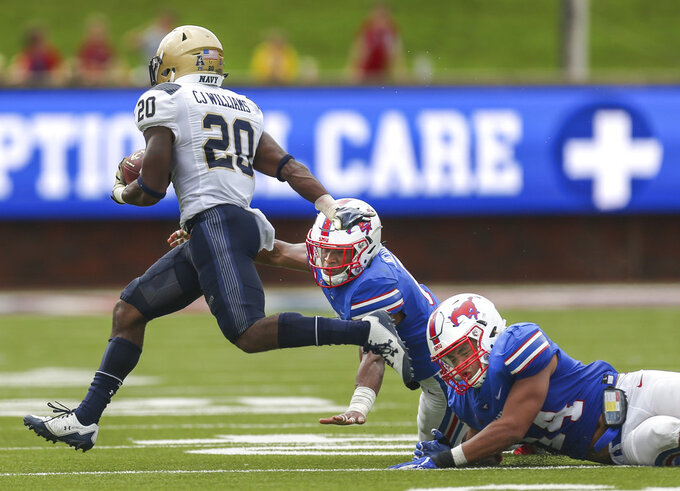 This Saturday, he will take in the rivalry from an even better spot — the field.

"I've seen a lot, heard a lot, heard the excitement, been on the sideline for that, in the stands for them as well, for two years," Kauppila said . "I'm excited for the opportunity without a doubt."

There's no need to stress the importance of the game between Air Force (1-3) and Navy (2-2) at Falcon Stadium. This is for bragging rights. This is for a leg up to capture the coveted Commander-in-Chief's Trophy, which goes annually to the academy with the best record in the round-robin competition. Army enters the season as the reigning champion, with Air Force earning the crown in 2016 and Navy in '15.

"We need to bring it back," Navy senior fullback Anthony Gargiulo said. "It's been a minute since we've had it here."

This marks the 47th year of the competition, with the winning team receiving an invitation to the White House. Air Force has won 20 outright titles, Navy 15 and Army seven. If the three service academies split their matchups, the team that won it the year before retains the crown.

The Falcons enter the game having dropped three straight, while the Midshipmen had a week off to think about a 31-30 overtime loss at SMU. No extra motivation necessary — this game is always circled on both team's calendars.

"Our guys recognize how important the Commander-in-Chief's Trophy is for the program, for our goals," Navy coach Ken Niumatalolo said.

This will really be the first time Kauppila has gone against a triple-option offense. Well, outside of seeing it every day in practice against his own offense. The Falcons have been tough against the run (98.5 yards per game), but have been vulnerable to an air attack (282.8).

"There's never a time when I'd say Army and Navy aren't the perfect team for us to play," said Kauppila, who broke his collarbone while blocking a punt early last season. "We build this program for these types of games. That doesn't mean we have any excuse to have shortcomings in other areas. There's no excuse for that.

"We're built inherently to stop the run, that's been one of our strengths. It's something we really take pride in."

Here are things to know in a series that Air Force leads 29-21:

QB QUANDARY: The Falcons list senior Arion Worthman and junior Isaiah Sanders both as starters. Sophomore D.J. Hammond III has taken snaps, too. Worthman set an Air Force record with 396 total offensive yards last season in a 48-45 loss at Navy. Asked if Worthman could be moved to receiver should he not be the starter, coach Troy Calhoun simply responded: "He's a quarterback."

HANG ON TIGHT: Brace for the noise, because before kickoff at Falcon Stadium there will be flyovers by a B-1 Lancer, the F-35 Lightning II and the UH-1 Huey.

ABEY'S AVAILABILITY: Senior receiver/quarterback Zach Abey remains questionable for the game, Niumatalolo said on the team's website earlier in the week. In 20 carries this season, Abey has earned a first down or scored a TD on 14. "He's played as well as anybody on our team," Niumatalolo said. "If we knew for sure he'd be available, it would definitely help us. We just press forward."

PASS THE TEST: The Midshipmen had a week off to rest and take exams. "We don't have any excuses," Niumatalolo said. "Just go play now. We'll be as ready as we'll ever be."