No. 1 Georgia braces for tough Tide after stress-free season 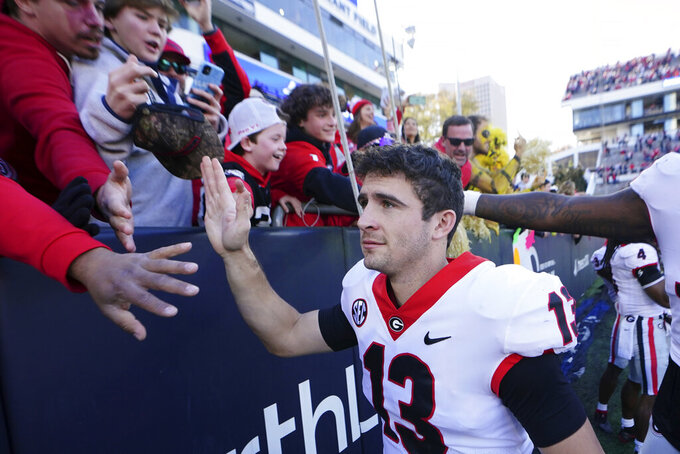 ATHENS, Ga. (AP) — Should top-ranked Georgia face late-game stress against Alabama in the Southeastern Conference championship game on Saturday, it will be a first for the Bulldogs.

Georgia's 12-0 season has been free of anxiety. The Bulldogs never faced a second-half deficit in their procession of runaway wins. Fourth-quarter drama for Georgia's starters involved little more than staying out of the way of second- and third-string players running onto the field.

If the SEC championship game is decided in the fourth quarter, players for No. 4 Alabama will be able to draw on the experience of playing through other stressful games.

“I guess the benefit on that is just the experience that comes with it and being able to learn from it," Crimson Tide wide receiver John Metchie said Monday. "Being able to go back and see and just be more critical, more self critical and critique the games better tighter. And just just the more things to learn from.”

If faced with their first late-game drama, Georgia players would have to rely on their practice for high-anxiety situations.

Bulldogs coach Kirby Smart insists the stress his staff creates for players in practice is sufficient preparation for real-game pressure. He said having his first-string offense and defense compete creates game-like stressful situations.

“Those are heat-of-the-moment type plays,” Smart told reporters on Monday.

“I know for a lot of you guys would say it’s not the same as a game. It is. We make it like a game. You can only want to do it right so bad. If you won’t do it really right in practice, you’re creating that same situation. A lot of our guys have played in the heat of the moment many times. I look at the start of every game that way.”

Georgia's defense created the lopsided scores which led to the stress-free second halves. The Bulldogs led the nation by allowing only 83 points, or 6.9 per game.

No other defense was even close to Georgia's dominance. The nation's second-best scoring defense was Clemson with 180 points allowed, or 15 per game.

Georgia's average margin of victory in SEC games was 40-8.3. The Bulldogs trailed only four times, including twice in a 41-17 win over Tennessee. The Vols were the only team to lead Georgia after the first quarter, and the Bulldogs responded to the second-quarter deficit by scoring 34 unanswered points.

“No, we have too much respect for who Alabama is this year as a team to allow ourselves to do that,” Bennett said. “We’re going to keep approaching this game like we have been every other game, and that’s with the utmost respect for the opponent and to be able to execute our jobs to the best of our ability.”

The win over Auburn, which led 10-0 through three quarters, was Alabama's most dramatic comeback. They also trailed Tennessee and LSU after the first quarter before winning those games.

“We just always preach to never give up,” Alabama defensive end Phidarian Mathis said Monday, adding “everybody was bought in” when the Crimson Tide trailed Auburn.

“You could feel the energy on the sideline,” Mathis said. “Nobody had their heads down, everybody had their chin up. You know, we was ready to go to war when we got into that situation. So I just feel like this team has grown a lot, and it shows how much everything means to us.”