No. 19 Arkansas, No. 23 Cincinnati meet in marquee opener 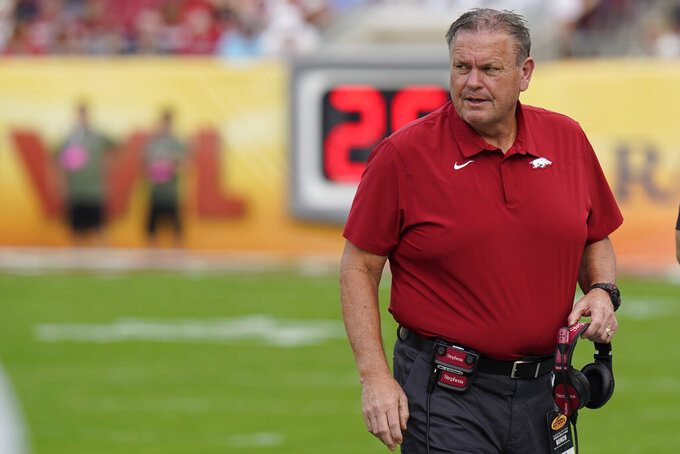 FILE - Arkansas head coach Sam Pittman looks on during the first half of the Outback Bowl NCAA college football game against Penn State, Jan. 1, 2022, in Tampa, Fla. Pittman's task when he was hired in 2019 was to bring a team with 19 straight SEC losses back to national relevancy. He's done it, and now there's excitement around the program. (AP Photo/Chris O'Meara, File)

FAYETTEVILLE, Ark. (AP) — When Arkansas and Cincinnati agreed in August 2019 to play a future non-conference game, the announcement didn’t draw much attention outside the two teams’ fan bases.

Now, it's a showcase of programs on the rise.

The Razorbacks were on the heels of their worst season in program history, posting a 2-10 record and going winless in SEC play. Things have changed since then under coach Sam Pittman, and last season, the Razorbacks went 9-4 and won the Outback Bowl.

Back in 2019, Cincinnati had just completed its second year under coach Luke Fickell, who improved the Bearcats from four wins in 2017 to tie a program-best with 11 in 2018. Many thought that run would be a “one-hit wonder,” the type of season to only come around once in a Group of Five program’s history. Instead, Cincinnati kept climbing and reached the College Football Playoff last season.

Now, that game has the spotlight. No. 19 Arkansas and No. 23 Cincinnati will meet in one of college football’s marquee Week One matchups, a Top 25 showdown Saturday at Donald W. Reynolds Razorback Stadium.

Pittman's task when he was hired in 2019 was to bring a team with 19 straight SEC losses back to national relevancy. He's done it, and now there is excitement around the program.

“Now the expectations are certainly high, and they’re high in our building as well,” Pittman said. “I think opening up against a Top 25 program -- which I think Cincinnati’s higher than that even, they would do well in the SEC, I know that -- it should have helped us in the summer, should have helped us in fall camp understanding that we’re not playing a team that’s way inferior to us. We’re playing a team that’s every bit as good as we are. So, I think that’s helped us. I hope it has.”

Pittman, who was Cincinnati's tight ends coach in 1996, respects what Fickell has accomplished.

“It’s unbelievable,” Pittman said. “That’s a blue collar-type town. It’s tough, and he’s got that team playing like that. They’re a little scary because they have a chip on their shoulder. They’re the underdog type team. Man, they play hard.”

Replacing Desmond Ridder won’t be an easy task for whoever wins the Bearcats’ starting quarterback job. The Atlanta Falcons drafted the two-time AAC Offensive Player of the Year.

Fickell said the starter — Eastern Michigan transfer Ben Bryant or redshirt sophomore Evan Prater —will not be announced until game time. Pittman earlier this week had a unique take on how to prepare for the Bearcats' offense.

On the other hand, Arkansas feels confident in quarterback KJ Jefferson. In his first year as the Razorbacks' starter, he guided the team to its best record in a decade. He passed for 2,676 yards and ran for 644, combining for 27 touchdowns.

Arkansas and Cincinnati boast offensive lines considered to be among the best and most experienced in the nation.

The Razorbacks return four starters on the front, while the Bearcats bring back all five.

“They’ll try to bloody your nose and come right at you,” Pittman said of the Cincinnati line. “They’re really good in pass protection…I can’t speak for Coach (Fickell), but I’m assuming he thinks that’s the strength of their team. I do.”

Arkansas star safety Jalen Catalon suffered a season-ending injury in 2021 which caused him to miss the Razorbacks’ final seven games. He was named to this year’s preseason Associated Press All-America team as a second-team safety.

“I think anytime you lose something, it even becomes more special when you get it back or you have a chance to earn it back or whatever may be the case,” Pittman said. “I think he’s really excited to play. He’s played extremely well, and we’ll see what happens."

Signs point to Saturday's contest being the largest-attended home opener in Razorback Stadium. It expanded to seat 80,000 in 2018. It's the first time Arkansas has opened with a Top 25 matchup in Fayetteville.

The Bearcats haven’t fared well in their last two outings with SEC competition.

A 27-6 loss to Alabama in the Cotton Bowl ended the Bearcats’ greatest season ever in 2021. Cincinnati also lost 24-21 to Georgia in a thrilling 2020 Peach Bowl. The two losses are the Bearcats' two most recent defeats.