No. 2 Ohio State plays at No. 10 Michigan seeking record run 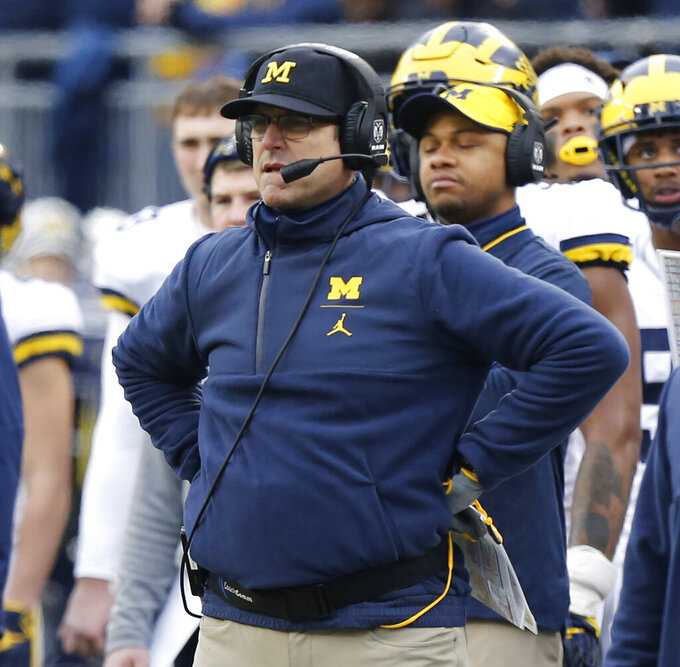 The Buckeyes are the top-ranked team in the College Football Playoff rankings, putting them two wins away from having a chance to play for a national title under first-year coach Ryan Day. Ohio State earns a spot in the field of four if it sets a school record with an eighth straight win over the Wolverines and avoids another upset next week in the Big Ten championship game. Jim Harbaugh is 0-4 against the Buckeyes and his legacy as a coach at Michigan hinges on his record in what is known as The Game. With a win, the Wolverines would reach 10 victories for the fourth time under Harbaugh and improve bowl possibilities.

Ohio State QB Justin Fields vs. Michigan’s defense. The Wolverines gave up 62 points and 567 yards the last time they played the Buckeyes, who may be even better on offense this season. Fields is a threat to make plays with his arms and legs against a defense that hasn’t proven its man-to-man, blitz-heavy scheme works against top-flight competition. Ohio State is scoring a nation-high 49.4 points per game, leaning on Fields, who has thrown 33 touchdown passes with only one interception and run for 10 scores. Michigan has the fourth-ranked defense in the country, giving up 267 yards a game and is among national leaders by allowing 16.2 points per game.

Ohio State: DE Chase Young. He had seven sacks and forced four fumbles in his last two games against No. 9 Penn State and No. 13 Wisconsin.

Michigan: QB Shea Patterson. He threw for nine touchdowns the past two weeks, becoming the first quarterback in school history with five touchdown passes in regulation.

The Buckeyes have matched their longest winning streak in the 115-game series, equaling a seven-game run from 2004 to 2010. ... Michigan has won four straight games this season and six of seven since getting routed by the Badgers. ... Ohio State is 17-0 since losing 49-20 to Purdue on Oct. 20, 2018. ... Ohio State co-defensive coordinator Greg Mattison and linebackers Al Washington were hired away from Harbaugh’s staff on consecutive days last winter. ... Michigan has scored 38-plus points the past four games.