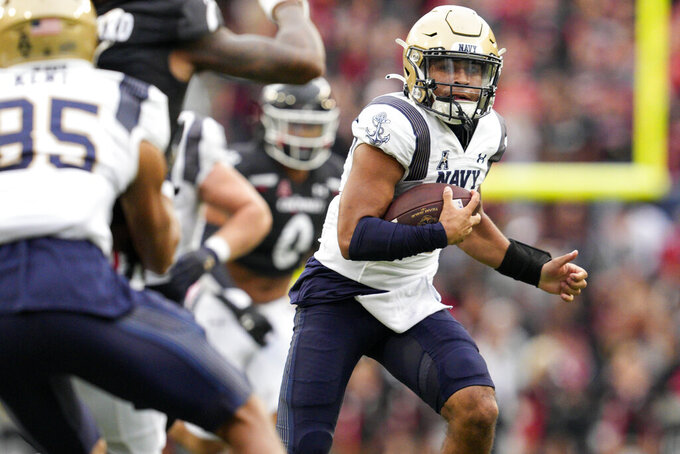 Navy quarterback Xavier Arline, right, runs with the ball during the first half of an NCAA college football game against Cincinnati, Saturday, Nov. 5, 2022, in Cincinnati. (AP Photo/Jeff Dean)

The Irish earned a signature win in their first full season under coach Marcus Freeman when they beat Clemson last weekend. Now they have to show they can avoid a letdown when they face the Midshipmen. Notre Dame has already lost to Marshall and Stanford this year, so the Irish should understand that it's dangerous to overlook teams.

Navy's option offense against Notre Dame's defensive front. This is always the challenge for Navy's opponents. Notre Dame faces the Midshipmen regularly, but the Navy system can still present problems if teams aren't well prepared. It's an interesting test for Freeman and his staff.

Notre Dame: RB Audric Estimé is coming off back-to-back 100-yard rushing games against Syracuse and Clemson. The last Irish player to do it three straight games was Tony Jones Jr. in 2019.

Navy: QB Xavier Arline took over after starter Tai Lavatai went down two weekends ago to a season-ending knee injury. Arline scored the winning touchdown in that game, then ran for 87 yards in a loss to Cincinnati last week. Arline is also a starter on the lacrosse team.