No. 22 Syracuse looks to snap losing skid at struggling Pitt 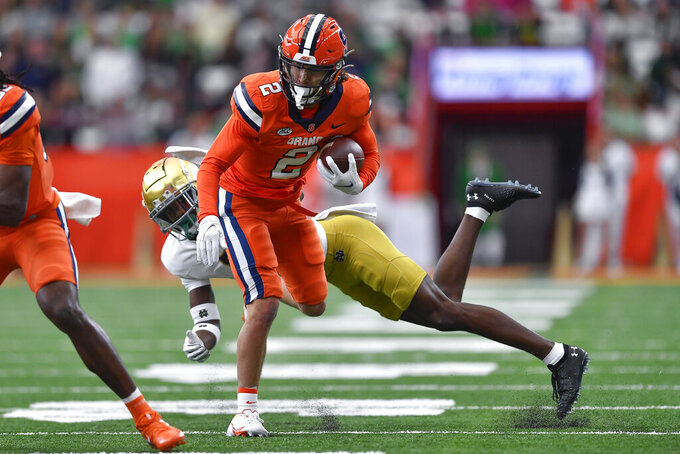 Line: Pitt by 3 1/2, according to FanDuel Sportsbook.

The Orange will try to keep their surprising season going, though a loss at Clemson last month means they'll likely need to win out and get some help if they want to keep their unlikely bid for an Atlantic Division title alive. The Panthers have seen their hopes for back-to-back trips to the ACC title game disappear and need to at least split their final four games to assure themselves of a bowl berth. A loss to the Orange would put a significant dent in those plans.

Syracuse's run defense against Pittsburgh's offensive line. The Panthers have been heavily reliant on RB Israel Abanikanda while the passing game has struggled to generate anything close to consistency. Abanikanda leads the country in all-purpose yards and tops the ACC in yards rushing at 135.8 yards per game. If Syracuse wants to in at Acrisure Stadium for the first time since 2001, it will need to force Pitt QB Kedon Slovis to pass.

Syracuse: RB Sean Tucker. The sophomore has rushed for 2,880 yards in his career, fifth all-time at Syracuse. He needs 55 yards to move past Pro Football Hall of Famer Larry Csonka’s total of 2,934 from 1965-67. With the quarterback situation unsettled, Tucker will need to be effective.

Pittsburgh: DL Calijah Kancey. The All-American candidate was ejected from last week's loss to North Carolina in the second half after being called for targeting. The fact the Tar Heels pulled away in his absence is not a coincidence. Kancey is arguably the best defensive player in the ACC and the Panthers need him to be a difference-maker.

The Panthers have won 17 of the last 20 meetings between the schools that have met each season since 1955 and ripped off nine straight against the Orange in Pittsburgh. ... The QB situation for the Orange is up in the air. Garrett Shrader didn't play in the second half of last week's loss to Notre Dame. Carlos Del Rio-Wilson replaced Shrader. Head coach Dino Babers has been quiet about who will start against the Panthers. ... The Panthers have beaten a ranked opponent in each of their last six seasons but are 0-2 against ranked teams so far in 2022.