No. 22 Tulsa seeks 6th straight win in matchup with Navy 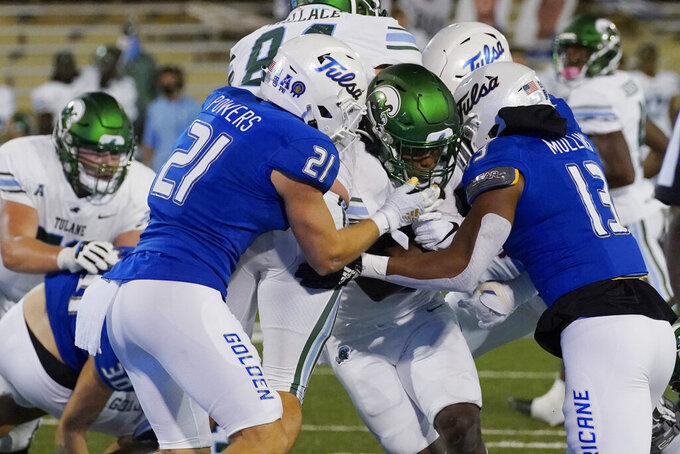 Tulane running back Stephon Huderson, center, fights through Tulsa defenders Bryson Powers (21) and Lamar Mullins (13) for a touchdown during the second half of an NCAA college football game in Tulsa, Okla., Thursday, Nov. 19, 2020. (AP Photo/Sue Ogrocki) 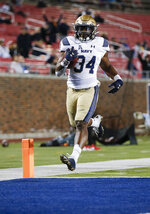 Tulsa can clinch a berth in the American Athletic Conference championship game on Dec. 19 with a victory here or in the finale against unbeaten Cincinnati. The Golden Hurricane is also looking for a sixth straight win, the team's longest run since a seven-game streak in 2012. Navy needs a win to avoid a losing season and to generate momentum heading into the annual clash against Army next week.

Tulsa defense vs. Navy run game. Navy’s offense has sputtered at times this season because of quarterback issues, but any team facing the Midshipmen must stop the triple option to be successful. Navy ran for 388 yards in last season’s 45-17 rout of Tulsa, but is ranked only 40th in the nation in yards rushing. The Golden Hurricane are yielding only 150.2 yards rushing per game and have big 355-pound nose guard Tyarise Stevenson operating in front of standout linebacker Zaven Collins.

Tulsa: Collins has been virtually unstoppable. The 6-foot-4 junior leads the Golden Hurricane with 48 tackles (32 solo), 10 1/2 tackles for a loss and four sacks. He’s also returned two of his four interceptions for touchdowns, including a 96-yarder in overtime that beat Tulane on Nov. 19.

Navy: Junior linebacker Diego Fagot leads the team with 61 tackles, nine for a loss, with three sacks despite missing one game and part of an another with an injury. ... Running back Nelson Smith leads the Midshipmen with 589 yards rushing, including a 142-yard performance last week against Memphis.

Game was originally scheduled for Nov. 7 before being postponed because of a COVID-19 outbreak at Navy. ... Midshipmen have won five straight in the series. ... Tulsa has rallied from a double-digit deficit in four of its five wins. ... Golden Hurricane has 13 takeaways in six games compared to 18 in 12 games in 2019. ... Navy has won 17 straight on Senior Day. ... Tulsa WR Keylon Stokes has 3,681 career all-purpose yards, including 2,204 receiving and 1,201 on kickoff returns. ... Navy has played at least two QBs in six of its eight games. ... Tulsa has been outscored 46-12 in the first quarter but holds a 58-30 edge in fourth quarter.