No. 23 California seeks to continue fast start at Ole Miss 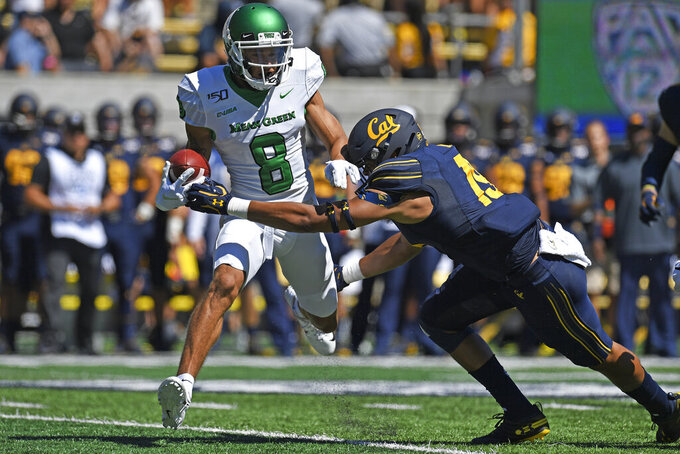 OXFORD, Miss. (AP) — No. 23 California wants to remain unbeaten, while Mississippi is seeking to make a statement with a win against a ranked team.

Cal can start the season 4-0 for the first time since 2015 if the Golden Bears are able to walk away with a road victory Saturday at Ole Miss (2-1).

Although the campuses are separated by over 2,000 miles, these programs are familiar with each other. They faced off just two seasons ago at Cal, with the Golden Bears scoring 20 unanswered points in the second half to win 27-16 at home.

"They have some really talented players that jump off the tape," Cal coach Justin Wilcox said. "They have a couple of coaches we are familiar with and have competed against a lot. They have really good players and coaches. It will be a great challenge for our team in all three phases."

The Rebels' chances of winning this one depend on whether they can solve a Cal defense that has held each of its last 10 opponents below 24 points. That stretch includes a 20-19 road upset of No. 22 Washington, which was ranked 14th at the time.

"I'm excited about this opportunity, a chance to have a top-25 team coming into Oxford," Ole Miss coach Matt Luke said "Cal is a very good football team. Watching them on tape, the first thing that jumps out is how good and physical they are on defense. They have one of the best secondaries we'll face all year."

Here are some other things to know about Saturday's Cal-Ole Miss matchup.

Quarterback Matt Corral and the Ole Miss offense have struggled to find consistency in the passing game. That passing attack faces perhaps its toughest challenge yet against a veteran California secondary that features Jaylinn Hawkins, who has seven career interceptions.

Ole Miss receivers coach Jacob Peeler was an assistant coach at California from 2013-2016. He's very familiar with the California secondary that has become the strength of the team.

"Every one of those kids was there when I was there," Peeler said. "Ashtyn Davis was actually a receiver before moving to defense. Hawkins was recruited as a receiver. The rest of them, (Camryn) Bynum, Josh Drayden are all very good. Their accolades are certainly well deserved."

Ole Miss' Elijah Moore has 18 receptions this year, but no other receiver on the Rebels' roster has more than four.

COULD EARLY KICKOFF TIME HAVE IMPACT?

This cross-country trip will be no easy task for Cal as it prepares to play in the sweltering Mississippi heat in a game that will kick off at 9 a.m. Pacific time.

Wilcox said the bears will begin to get adjusted to central time by waking up earlier on Wednesday. The Golden Bears planned to depart for Oxford on Thursday.

"We will get our body clocks started on Wednesday," Wilcox said. "The early start won't be an issue and we will hydrate like crazy.

The game-time temperature is expected to be around 90 degrees, and that also could be a factor.

Corral is a southern California native and acknowledged the heat is much different in Mississippi than it is out west. He believes it will take the Golden Bears some time to adjust to the warm temperatures and says that could have more of an impact than the early kickoff time.

"The heat is different, I'm not going to lie," Corral said. "A nice 70 degrees at practice versus it being 80 at six o'clock in the morning and even hotter at practice in the afternoon. There is a big difference. But at the end of the day, we have to put the football down and play."