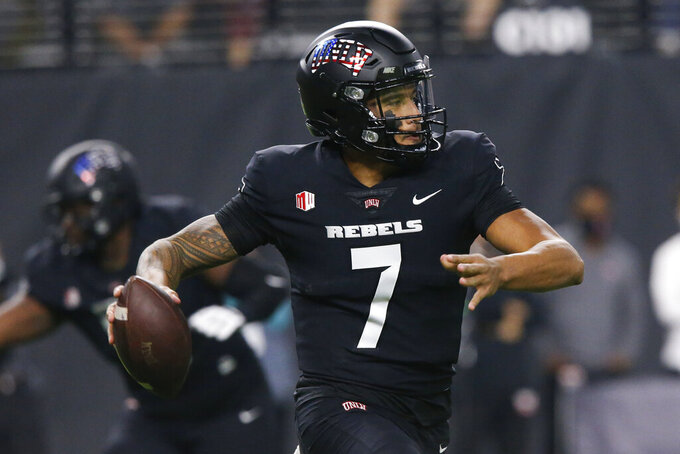 UNLV quarterback Cameron Friel looks for a receiver during the first half of the team's NCAA college football game against San Diego State on Friday, Nov. 19, 2021, in Las Vegas. (AP Photo/Chase Stevens)

The Aztecs led just 21-20 before Johnson found Jesse Matthews for a 7-yard strike with 3:33 left in the game.

San Diego State, which finished with a 5-0 road mark, improved to 10-1 overall, matching its best 11-game start since starting 10-0 in 1969. The Aztecs are one of five teams in the country currently with 10 wins, joining Cincinnati, Georgia, Houston, and UTSA.

Matthews finished with nine receptions for 75 yards and had three touchdowns, becoming the first San Diego State player to score three TDs in one game since Colin Lockett’s trio in the 2001 New Orleans Bowl.

Las Vegas product Elijah Kothe finished with five receptions for 84 yards for the Aztecs, while Greg Bell ran for 52 yards on 14 carries.

“I didn’t think we played Aztec football, especially on the defensive side,” San Diego State coach Brady Hoke. “We’ve got to do a better job. We can’t give up big plays thrown over our heads. We’ve got to coach better. We as a staff, we got to look at some things.”

UNLV lost starting quarterback Cam Friel midway through the first half and turned to Rogers, the original starter at the beginning of the season. Rogers looked nothing like the shaky quarterback who stepped in at times during the Rebels’ campaign.

Rogers finished 15 of 21 for 305 yards and two touchdown passes, while Steve Jenkins had five receptions for 176 yards.

Charles Williams, the Rebels’ career rushing leader, was held to 40 yards on 16 carries.

Instead, it was Rogers sparking the Rebels in the first half, going 6 for 7 for 126 yards and one touchdown, a 43-yard strike to a wide-open Zyell Griffin.

Griffin found his way behind San Diego State’s secondary and was alone when he caught the ball before waltzing in untouched.

The Aztecs would answer on their next drive, needing only 3:38 to travel 59 yards in 10 plays, culminating with a 4-yard TD pass from Johnson to Matthews to put San Diego State back on top, 14-10.

UNLV’s next drive started well but stalled when San Diego State stopped the Rebels on a 4th and 2 and got the ball back on its own 46-yard line with 49 seconds left in the half.

The Aztecs went right to work, fitting eight plays and 54 yards into a mere 44 seconds, as Johnson and Matthews hooked up a second time to push San Diego State’s lead to 21-10 at the half.

It marked the first time the Aztecs scored more than 23 points since Oct. 9.

“I feel like we still have a lot of work to do,” Matthews said. “We knew we had to points on the board for our defense. It was our time to step up.”

UNLV's Jacoby Windmon had a career-high three sacks, tying a program fourth-highest for a single game. Windmon now has 6 1/2 sacks on the year and 12 in his career.

At the very least, San Diego State will likely hold in the Top 25 discussion in this week’s poll with a possibility of moving down a spot or two after having trouble with the two-win Rebels. The Aztecs rank 19th in the College Football Playoff rankings.

UNLV: Ends its season at Air Force on Friday