No. 24 Cajuns aim to validate ranking vs. Georgia State 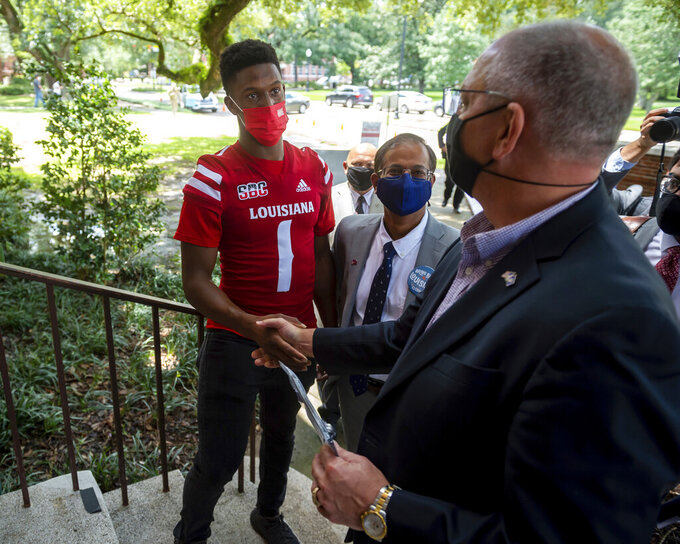 FILE - in this Aug. 19, 2021, file photo, Louisiana quarterback Levi Lewis greets Gov. John Bel Edwards as he tours the University of Louisiana Campus vaccination site as part of the university's Shot for $100 campaign in Lafayette, La. Several months since COVID-19 vaccinations were made widely available in the U.S., the subject continues to disrupt  professional and college sports. (Scott Clause/The Daily Advertiser via AP, File)

Line: Louisiana-Lafayette by 12 1/2, according to FanDuel Sportsbook.

No. 24 Louisiana-Lafayette is ranked for the first time since the preseason and must keep winning if it wants to stay in the poll. The Ragin' Cajuns also would clinch the Sun Belt West Division — and a berth in the Sun Belt Conference title game — with a win. Georgia State, winner of three straight, is tied atop the East Division and also could use a victory to strengthen it's bid to reach the league championship game.

Georgia State: Junior LB Jordan Veneziale has a team-high 65 tackles, with 3 1/2 tackles for loss, two sacks, a forced fumble and a fumble recovery. His average of 8.1 tackles per game, third in the Sun Belt.

Louisiana-Lafayette: QB Levi Lewis is 29-7 as a Ragin’ Cajuns starter and last week threw three touchdown passes to give him 65 for his career to surpass Jake Delhomme for first all-time in school history.

Georgia State has averaged 282 yards rushing during its three-game winning streak. ... The GSU defense has allowed just three touchdowns in its past two games combined. ... PK Noel Ruiz ranks No. 5 among all active FBS players with 363 points scored. ... The Cajuns have gone 28-5 since the start of the 2019 season. ... ULL has run an offensive play from scrimmage on fourth down 16 times this season, converting 13 for first downs. ... The Cajuns are 4-0 on Thursday nights under coach Billy Napier.