No. 4 Clemson plays for 1st time in 3 weeks against Pitt 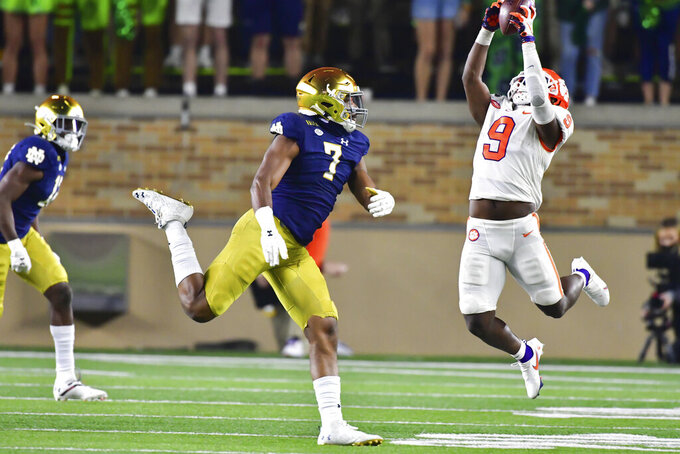 Clemson is playing the rest of the season for its spot in the ACC championship game and the College Football Playoff. The Tigers can’t afford to lose any remaining games in the regular season if it hopes to compete for a sixth straight league title next month. Pitt is the last team to defeat the Tigers at home with a last-second field goal for a 43-42 win in 2016.

Clemson quarterback Trevor Lawrence vs. Pitt’s defense. Lawrence has not played a game since Oct. 24, the week before he tested positive for COVID-19 and missed the Tigers’ next two matchups while recovering. He’ll need to be very sharp against a Panthers’ D that leads the ACC and is the only league team allowing less than 300 yards a game this season.

Pitt DL Patrick Jones II: He has been a terror on the Panthers’ defensive line, leading the ACC with eight sacks and is tied for fourth in the league with 11 tackles behind the line of scrimmage.

Clemson: RB Travis Etienne: Clemson’s senior running back had played strongly the first half of the season, so much so he was a strong candidate for the Heisman Trophy. But Etienne has slowed the past three games, rushing for just 198 yards (69 yards per contest).

The Tigers have won their past 26 games at Death Valley since losing to Pitt in 2016. ... Clemson won its first-ever game over Pitt at the ACC Championship in 2018, 42-10. ... The Panthers are 5-11 since 2000 in games against top-five opponents. Their last win in such games came in a 24-17 victory over No. 2 Miami in 2017. ... Clemson is looking to improve to 50-3 against ACC opponents over the last six seasons. ... Pitt has scored more than 40 points its past two games, the first time they’ve reached that point total in consecutive games since 2016. ... Etienne has scored at least two touchdowns in 23 games, two shy of the all-time mark shared by Miami of Ohio’s Travis Prentice and Wisconsin’s Montee Ball. ... Pitt leads the nation with 10.8 tackles for loss per game. It’s also fourth nationally with 12 interceptions.