No. 4 USC hopes to break playoff dry spell for Pac-12 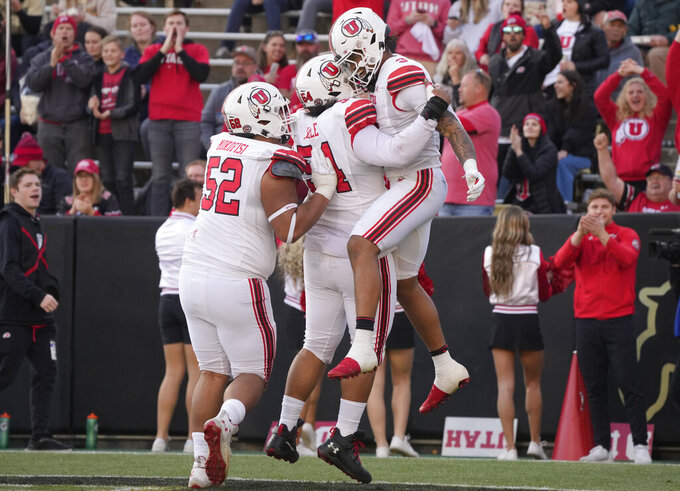 Utah quarterback Ja'Quinden Jackson, right, celebrates with offensive linemen Paul Maile, center, and Michael Mokofisi after running for a touchdown in the first half of an NCAA college football game against Colorado, Saturday, Nov. 26, 2022, in Boulder, Colo. (AP Photo/David Zalubowski)

LAS VEGAS (AP) — The Pac-12 will take a neutral stance when No. 4 Southern California plays No. 12 Utah in the championship game Friday night, but there's little doubt what a USC victory would mean for the conference.

A win by the 11-1 Trojans would put them in the College Football Playoff and make USC (No. 4 CFP) the first Pac-12 team since Washington in 2017 to make the final four.

“I think it's incredibly important that one of our teams makes the playoff,” Pac-12 Commissioner George Kliavkoff said Thursday. "It's been one of our goals, and we've been building a multiyear strategic football plan to make that happen. That said, I don't have a rooting interest tomorrow.

“We think there's a great opportunity for multiple of our teams to be in New Year's Six bowls. We're taking a step forward compared to where we were a year ago. We'll take a step forward again next year.”

Next year will be the final season that the playoff field will remain at four teams. The CFP announced it would expand to 12 schools beginning in 2024. The six highest-ranked conference champions will receive automatic bids, so the Pac-12 will likely be an annual participant.

If USC beats Utah this weekend, it would mark a major step in the Trojans' return to prominence under first-year coach Lincoln Riley.

“Everybody sees (the high stakes) now, but the reality is all the games have had this much at stake," Riley said. "If you don’t win those, you’re not even playing in this one. You’re at home and getting ready go out and recruit, and players aren’t practicing like 99% of the teams out there.”

Utah (9-3) hopes to do more than simply play spoiler. The Utes will try to defend their conference championship.

“A lot of things had to line up for us," Utes coach Kyle Whittingham said of the journey to the title game. "They all transpired. Our team did a really good job of taking care of our business.”

Riley faced rematches in winning four Big 12 Conference championships at Oklahoma. The Sooners lost to two of those teams in the regular season.

“It's great that it worked out that way," Riley said of facing Utah. "It's a championship game. You're going to play a good team regardless. I don't think we would be any more or less excited if it was anyone else. This is not a revenge game."

Utah won its first Pac-12 title last season after beating Oregon in the regular season and then in the conference championship game.

The Utes are playing in their fourth championship game in five seasons, but the season didn't live up to expectations.

They hoped to make a real run at the playoffs, but fell short with losses to Florida, UCLA and Oregon.

“We’re not saying we’re thrilled with that (record), but that speaks also to the level of where we’re at when you think of a 9-3 season as not quite what you were after,” Whittingham said.

USC quarterback Caleb Williams is the favorite to win this year's Heisman Trophy, which would make him the seventh Trojan to officially claim college football's top award. Reggie Bush had his vacated because of NCAA rules violations.

Williams has rushed and passed for 44 touchdowns.

“You can get there, but you can’t sack him because he’s so elusive and he’s strong, too," Whittingham said. "So many defenders during the course of the season have dripped right off him because you just can’t get him down. It’s not as much a function of how many (pass rushers) you’re bringing, but keep him in the cage because when he gets out on the edges, he’s dangerous.”

This game matches the Pac-12's top scoring offense in USC against the conference's No. 1 scoring defense in Utah.

The Trojans average 42.5 points a game, which also is third nationally. Washington is the only other Pac-12 team averaging at least 40 points.

Utah gives up a 20.1-point average, and the Utes also are first in the conference in average total yardage (317.5) and passing yardage (206.2) allowed.