No. 5 Clemson, No. 14 Syracuse in undefeated ACC showdown 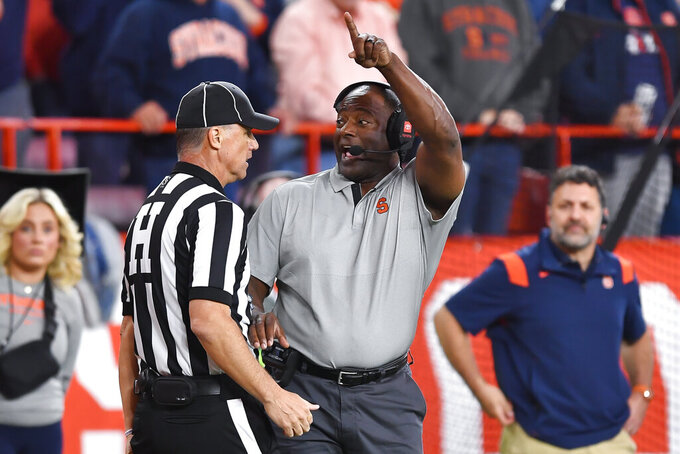 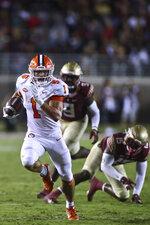 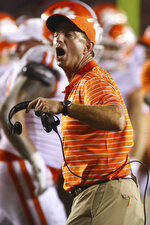 Line: Clemson by 13 1/2, according to FanDuel Sportsbook.

A spot in the ACC championship game and, possibly, a College Football Playoff berth. Clemson wants to keep on track for both with a fifth straight win over the Orange. But while a Syracuse win would be its best start since its last undefeated season in 1987 — and mark it the favorite to play for an ACC title in December — it would likely end the chances for a conference team to reach the CFP four-team field.

Clemson RB Will Shipley vs. Syracuse's run defense. Shipley's relentless style has carried the Tigers offense much of the year. He is second in the ACC in all-purpose yards and has accounted for eight touchdowns. Syracuse is second in ACC rushing defense, giving up just 95 yards a game on the ground this fall.

Syracuse: QB Garrett Shrader is among the top five in the ACC — and top 25 nationally — in completion percentage, passing efficiency, points responsible per game and yards per passing attempt.

Clemson: DE Myles Murphy has caught fire after a slow start to the season. The highly regarded NFL prospect leads the Tigers with five sacks and is third on the team with three pass breakups.

Clemson has won an ACC-record tying 37 straight at home and can surpass Florida State's old conference mark with a victory this week. ... Syracuse has not won this many games in a row since its run of eight straight in 2001 under Paul Pasqualoni. ... Clemson leads the Football Bowl Subdivision with a 13-game win streak after closing last season with six consecutive victories. ... Syracuse has allowed just 13.2 points a game this season, sixth fewest in the FBS. ... The Tigers have averaged more than 36 points a game during its current winning streak. ... Syracuse receiver Oronde Gadsden II is the first ACC receiver this season with three 100-yard plus games. ... Clemson QB DJ Uiagalelei has thrown at least three touchdown passes in two straight games. Trevor Lawrence in 2020 was the last Tiger passer to do it in three consecutive games. ... Syracuse is on the shortlist of programs with a win over Clemson since 2015. The Orange beat the eventual ACC champions and CFP team 27-24 in 2017. Clemson has only lost 10 games in the last eight seasons.