No. 5 Ohio State will be facing inspired underdog in Huskers 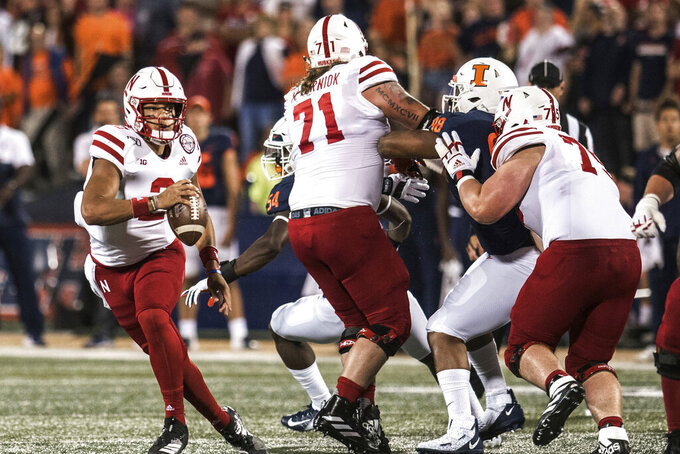 Nebraska quarterback Adrian Martinez (2) looks for an open receiver in the first half of an NCAA college football game against Illinois, Saturday, Sept. 21, 2019, in Champaign, Ill. (AP Photo/Holly Hart) 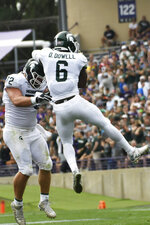 No. 5 Ohio State at Nebraska

The Buckeyes (4-0, 1-0) look every bit a contender for the College Football Playoff. Their playoff bids the past two years ended because of losses to unranked Big Ten West opponents. Nebraska (3-1, 1-0) is still looking for its first statement win under second-year coach Scott Frost, and this would be a doozy. Nebraska played the Buckeyes within five points in Columbus last year, so intimidation shouldn't be an issue at home — even though the Buckeyes have outscored their first four opponents by an average of 54-9.

The decision on which player Indiana starts at quarterback, Peyton Ramsey or Michael Penix Jr., might not come until game time. Ramsey, the most accurate passer in program history, began the season as the backup but has started the last two games in place of the injured Penix. The Hoosiers (3-1, 0-1) have completed 68 percent of their attempts for an average of 308 yards per game. The No. 25 Spartans (3-1, 1-0) are allowing just 5.4 yards per pass attempt and picked off three passes against Northwestern last week.

Ohio State has held its first four opponents to fewer than 300 yards for the first time since 1996. ... Minnesota (at Purdue) is 3-0 despite trailing for a combined 21 minutes, 49 seconds in fourth quarters. ... No. 22 Iowa (vs. Middle Tennessee) has scored at least three points in all 12 quarters it's played. ... Indiana has lost 14 straight against Top 25 opponents since beating a then-No. 17 Michigan State in its 2016 Big Ten opener. ... Rutgers' 18 sacks allowed since the start of the 2018 season are the fewest among Big Ten teams. ... Rondale Moore's career average of 171.1 all-purpose yards per game for Purdue is tops among active FBS players. ... The Ohio State-Nebraska game is the second matching teams with 900 or more wins. The first such game was Michigan-Ohio State last year.

The Wildcats (1-2, 0-1) have won three of the last five in the series, including a 31-17 victory at home last year. Northwestern is one of those teams that tends to get better as the season progresses, but a win in Madison is a tough ask. The eighth-ranked Badgers (3-0, 1-0) have given up only 14 points in three games. Northwestern's offense, particularly through the air, simply has been bad.

The junior has been good but not great through three games and is coming off an open date following a rough outing against Pittsburgh. Clifford and the 12th-ranked Nittany Lions (3-0) go against Maryland (2-1) on Friday night in his first road start. The Terrapins' defense has 13 sacks in three games and opponents are converting just 24 percent of their third downs.