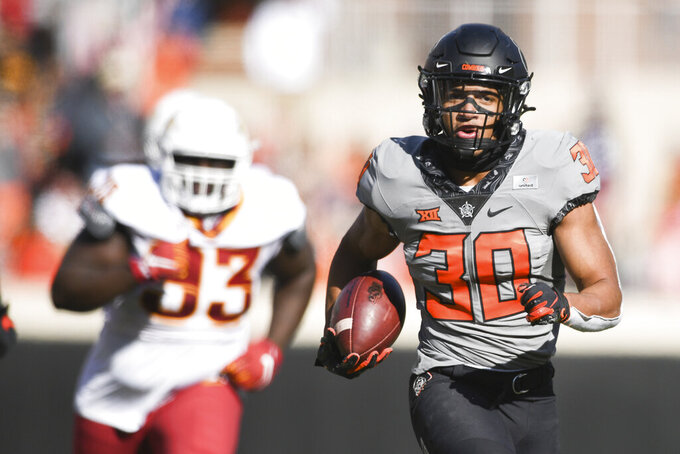 Chuba Hubbard (30) scores a touchdown during the first half of an NCAA college football game against Iowa State Saturday, Oct. 24, 2020, in Stillwater, Okla. (AP Photo/Brody Schmidt)

That’s why he’s not exactly thrilled to be facing him.

Yurcich, the former Oklahoma State offensive coordinator, now has that position at Texas. And now one of the Big 12's most accomplished assistant coaches stands in the way of Oklahoma State keeping its dream season on track. The sixth-ranked Cowboys (4-0, 3-0 Big 12) will try to remain in the race for a College Football Playoff spot when they host the Longhorns (3-2, 2-2) on Saturday.

Under Yurcich, Texas ranks sixth nationally with 45 points per game.

“I’m excited for Mike’s career,” Gundy said. “He was extremely loyal during the time that he was here and had a chance to move on and better himself. ... I’m not looking forward to facing him because I know what kind of offensive coach he is.”

During Yurcich’s six years with the Cowboys, Oklahoma State averaged 38 points and 478.3 yards per game. The program posted a 52-24 record, had four 10-win seasons and won four bowl games.

Last season, Yurcich was quarterbacks coach and passing game coordinator at Ohio State. The Buckeyes were third in the nation in scoring offense with a school-record 46.9 points per game.

He will return to coach in Stillwater for the first time since he left. He said he’s going to try to treat the game like any other.

“I would be disappointed in myself I took some other approach and got too emotional or thought about anything other than a faceless opponent, what’s their tendencies on third down, what are our calls, what are we trying to attack, what do we need to be looking for?” he said. “Those are the things that will be going through my mind.”

Oklahoma State's defense is carrying much more of the load this year than usual.

The Cowboys lead the Big 12 in sacks per game with 4.7 per contest in league play. Calvin Bundage leads the conference with 3.5 sacks and Trace Ford has three.

Ehlinger provides another element with his running ability and toughness. He has seven rushing touchdowns and is an excellent short-yardage ball carrier.

“They’ll design runs for him and he’s not scared to run,” Gundy said. “He’ll run like a tailback.”

Texas had a rash of costly penalties in losses to TCU and Oklahoma that aggravated coach Tom Herman.

After 23 penalties over those two games, The Longhorns cleaned up a lot of field laundry with just five for 50 yards in their win over Baylor. One of those was earned by senior offensive lineman and co-captain Derek Kerstetter, who has been flagged for unsportsmanlike conduct at the end of plays the last two games.

“Did we wave a magic wand, say no more penalties and say a Harry Potter chant? No, we just got back to work,” Herman said “If (Kerstetter) doesn’t learn now after the second one, we’re going to have a lot harder, sterner conversations.”

Herman sounded annoyed this week when pressed on why Ehlinger is leading the team in rushing yards and touchdowns, with most of his yardage coming when he scrambles upfield.

Herman said the Longhorns’ backfield of Keaontay Ingram, Roschon Johnson and Bijan Robinson doesn’t have a “bell cow” to lean on. Ingram has had fumble problems and Johnson has been banged up the last two games and collectively the group has just one rushing touchdown. Robinson, a freshman who was one of the top recruits in the country, may be about to take a bigger role.

Longhorns receivers have struggled at times when faced with man-coverage in the secondary, which Oklahoma State likes to play. Longhorns wide receiver Joshua Moore leads Texas with six touchdown catches and showed an ability to win jump-ball situations. Texas will need him and Brennan Eagles to win those sort of individual matchups Saturday. “We’re going to have to defeat man coverage,” Herman said.

Oklahoma State running back Chuba Hubbard is moving up the school’s career charts.

He’s ninth in career rushing with 3,312 yards and trails Tatum Bell by 97 yards. His 33 rushing touchdowns are one behind Bell and Jeremy Smith for sixth place.

Last season, he ran for 2,094 yards and 21 touchdowns and finished eighth in the Heisman race. This season, he ranks seventh nationally in rushing with 119.5 yards per game and has scored five touchdowns.