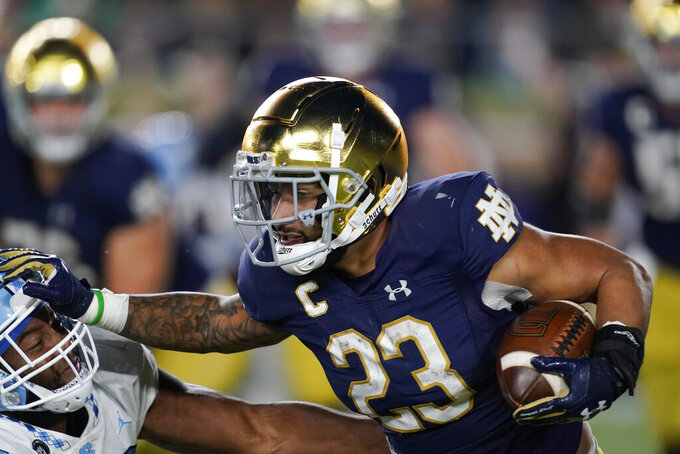 Line: Notre Dame by 20 1/2, according to FanDuel Sportsbook.

Notre Dame begins month of November on three-game winning streak and is No. 10 in the first College Football Playoff rankings. The Fighting Irish need to beat Navy, Virginia (6-3), Georgia Tech (3-5) and Stanford (3-5) and get plenty of help if they hope to make the four-team CFP for the third time in four seasons or receive an invite to a New Year’s Six bowl. Navy was very competitive in seven-point losses against No. 24 SMU and No. 2 Cincinnati but needs to win out to be bowl eligible.

Notre Dame’s turnover-creating defense against Navy’s triple-option offense. Led by linebacker JD Bertrand and defensive end Isaiah Foskey, the Irish defense has totaled 17 takeaways this season. But 12 of those are interceptions, and Navy quarterback Tai Lavatai didn’t complete a pass (0 of 4) in last week’s 20-17 victory at Tulsa. Navy is last (130th) in passing yardage per game (59 yards). But the Midshipmen are 14th in rushing yards (222.5) and fifth in time of possession (35:30).

Navy: LB Diego Fagot. The 6-foot-3, 240-pound senior captain received many preseason accolades and has justified them by making 71 tackles, including nine for minus-23 yards, in eight starts. He also has one interception and one fumble recovery which he returned 20 yards for a touchdown against SMU.