Not NCAA Property: Players push for reform on social media 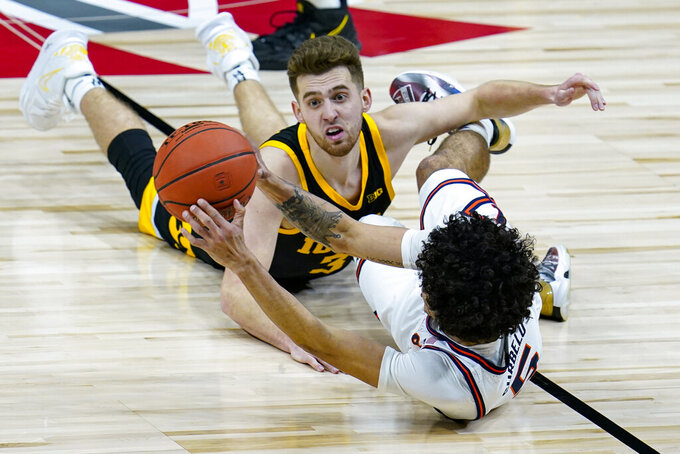 INDIANAPOLIS (AP) — Several prominent players at the March Madness basketball tournament took aim at the NCAA on social media Wednesday, demanding changes to how they are allowed to be compensated in the latest organized display of power by college athletes.

Isaiah Livers of Michigan, Geo Baker of Rutgers and Jordan Bohannon of Iowa were among those pushing for NCAA reforms with the hashtag #NotNCAAProperty. The athletes, who are staying at hotels a short walk from NCAA headquarters in downtown Indy, are urging the association to allow them to earn money for things like sponsorship deals, online endorsement and personal appearances.

The tweets were posted on the eve of the tournament. Because of the pandemic the event is being played entirely in Indiana with all 68 teams staying in what the NCAA describes as a “controlled environment.” Players are largely limited to their hotels, practices and games. The tournament generates nearly $900 million in revenue for schools and conferences from the NCAA's media rights deal with CBS and Turner Sports to broadcast the games.

“It's become clear to even the biggest NCAA apologist that we are playing this tournament primarily to deliver content to media rights partners,” said ESPN's Jay Bilas, a former Duke player. “That's what this season was about."

The NCAA is in the process of trying to change its longstanding rules to allow athletes to profit from their names, images and likenesses. But those efforts have bogged down since the start of 2021.

The NCAA was scheduled to vote on NIL legislation in January, but that was delayed after a letter from the Justice Department warned the proposed changes could violate antitrust laws. Now the DOJ is backing plaintiffs against the NCAA in a case that will be heard by the Supreme Court, further complicating the situation.

Earlier this week, NCAA President Mark Emmert told The Associated Press he was frustrated by the delay in NIL reform and hoped rules would be in place for the start of the next fall semester as was originally intended.

But there is a good chance the gridlock doesn't let up until after the Supreme Court hands down a decision.

“I know the members are ready, willing and able to act on (NIL), but there’s no doubt that this is all been made more complex because of their position, the DOJ, the antitrust division’s position and our uncertainty about it and its connection to the Supreme Court case,” Emmert said.

Critics say the NCAA is years overdue in addressing name, image and likeness issues, and college sports leaders have only themselves to blame for giving state lawmakers the opportunity to force the issue.

“They lead from behind,” said David Ridpath, associate professor of sport management at Ohio University and a former compliance officer for Division I schools who has been a sharp critic of the NCAA.

With dozens of states working on NIL-related bills, the NCAA has turned to Congress for help in the form of a federal law. The athletes decided enough is enough and grabbed the spotlight as the nation's attention turns to the tournament.

The National College Players Association, an advocacy group for college athletes, said in a statement Wednesday night that player from at least 15 teams competing in the men's basketball tournament tweeted in support of #NotNCAAProperty.

The players are calling for the NCAA to allow all athletes to be paid for the use of their names, images and likenesses by July 1st.

In addition, the athletes want:

— A meeting with Emmert.

— Meetings with state and federal lawmakers and Biden administration officials to advocate for laws that give college athletes physical, academic and financial protections.

The group said it also hoping for a Supreme Court ruling in support of the plaintiffs in Alston v. NCAA.

Livers, the second leading scorer for top-seeded Michigan, simply Tweeted: “I am #NotNCAAProperty"

Bohannon has been a vocal proponent for NCAA reforms that give athletes more rights. Earlier this year he was among several college athletes in Iowa to publicly back the state legislature's NIL bill.

“It’s been far too long,” he tweeted. “Time for our voices to be heard. #NotNCAAProperty”

While in Indianapolis, players are being shielded from the general public, tested daily for COVID-19 and strongly encouraged to limit their movements to the hotels where they are staying and the attached convention center where practice courts and meeting rooms are set up.

There have been a trickle of complaints about cold food and not much to do. Baker went to Twitter on Tuesday night to point out the inequities some players see.

“Think you can definitely be grateful to play this game while also understanding there’s more that should be on the table. Players ISOLATED entire year to help make this tournament happen. NCAA: rewarded w/ $900 million. Players: rewarded w/ free deodorant and small boxed meals," Baker tweeted.

Player empowerment has been one of the themes of this past year as college sports strained to find ways to play during the pandemic. Football players from the Pac-12 threatened boycotts over concerns about COVID-19 protocols, social justice issues and economic rights for college athletes.

Players also led movements to play after the Big Ten and Pac-12 canceled their fall football seasons — only to reverse course and play abbreviated seasons.

Now as players gather in the NCAA's hometown for its signature event they are again speaking up.

“OUR VOICES WILL BE HEARD. #NotNCAAProperty,” Morsell tweeted.