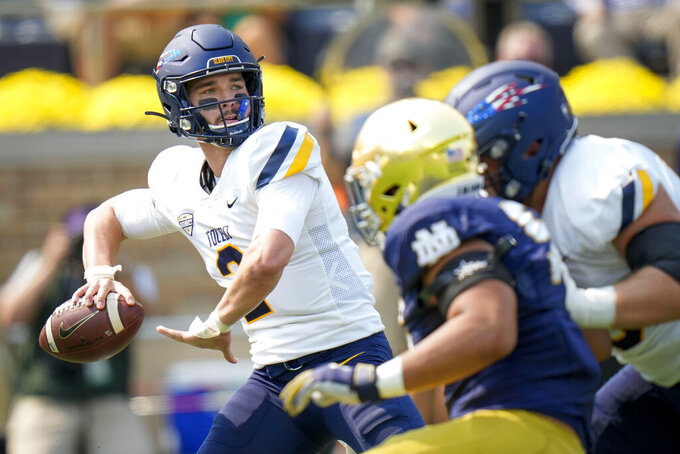 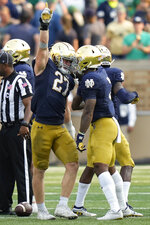 SOUTH BEND, Ind. (AP) — Jack Coan has played in only two games for No. 8 Notre Dame, yet he already has a place in Fighting Irish lore by leading them to a come-from-behind 32-29 victory over Toledo on Saturday despite dislocating a finger.

The grad transfer from Wisconsin, after having the finger on his throwing hand popped back into place by a trainer, hit Michael Mayer with the game-winning 18-yard touchdown pass with 1:09 remaining for the third lead change in a wild fourth quarter. The comeback by Brian Kelly's Irish (2-0) preserved Notre Dame's home winning streak at 25 games.

“I thought Jack was poised in the pocket and decisive with his throws,” Kelly said. “During a break (at 1:13), our assistant trainer Mike Bean went out there and performed a pull-the-finger thing. He got it back in place. Jack stepped up and felt he could keep going. On that last drive he was outstanding.”

Coan, who threw for 366 yards and four touchdowns in Notre Dame's season-opening 41-38 overtime victory at Florida State last Sunday, shared playing time with true freshman Tyler Buchner. Coan finished with 239 yards and two touchdowns but was sacked six times, threw an interception that was returned for a touchdown and fumbled the ball on another possession.

“Hats off to Toledo — Jason and his staff did a terrific job,” Kelly said of Jason Candle, coach of the Rockets (1-1). “From our perspective, we're happy with the win, but I can't even begin with the work we have to do to get better.”

The winning drive took just 26 seconds to go 75 yards on three plays and was aided by two Toledo penalties. Buchner rushed for 68 yards on seven carries and was 3-for-3 passing for 78 yards, including a 55-yard TD pass to Chris Tyree that gave the Irish a 24-16 lead with 10:57 to play.

Toledo answered with an 8-yard TD run by Bryant Koback (21 carries for 122 yards) with 7:48 left to pull the Rockets to within two. Then, after Kyren Williams fumbled for Notre Dame, the Rockets went 73 yards to the end zone, with Finn putting his team ahead. The Irish outgained the Rockets 449-353.

“I'm proud of the fight in that locker room,” Candle said. “By tomorrow, I'll probably have watched this tape a thousand times. We'll move forward.”

The Irish were their own worst enemy in the first half. The Rockets went to the locker room up 16-14 after Chris McDonald intercepted Coan’s pass intended for Mayer and returned it 27 yards for a touchdown with 46 seconds remaining. Toledo’s other points in the half came on three field goals by Thomas Cluckey.

Toledo: The unranked Rockets stayed close to the Irish with big plays off the arm of Bradley and the running of Koback. They forced three turnovers by the Irish and controlled the clock for 30:04.

Notre Dame: The Irish defense struggled again, giving up big plays, and Notre Dame had trouble moving the ball behind its rebuilding offensive line, which lost another left tackle when sophomore Michael Carmody injured an ankle. The Irish finished with 132 yards on 39 carries, with Williams gaining 78 on 16 carries.

“We had three turnovers, one for a touchdown, and you don't usually survive games like that,” Kelly said. “We gave up big plays on defense again and we haven't turned the corner in that perspective.”

Mayer, whose first scoring touchdown came on a 4-yard throw from Coan on the game's first drive, caught seven passes for 81 yards. He talked about the poise Coan showed during the game, particularly on the final drive.

Tyree caught a short pass from Buchner and turned it into his 55-yard TD play with 10:57 remaining that gave Notre Dame a 24-16 lead.

“(Buchner) is a baller,” Tyree said. “That's pretty obvious to see when he comes into the game.”

Toledo, which is about 2 1/2 hours by bus from the Notre Dame campus, had nothing to hang its head about after its play on defense.

“We know we left it all on the field,” McDonald said. “I'm proud of the team. I've been here three years and never seen us be that tough.”

Linebacker Dyontae Johnson, who had a team-high 10 tackles, also was pleased.

“It’s the same mindset we’re gonna have all season — never lay down, never quit,” Johnson said. “We knew we were getting in their head. We knew we were putting up a good fight."

Despite a close win, Notre Dame could move up a spot depending on poll voters’ opinions of No. 3 Ohio State’s home loss to No. 12 Oregon.

Notre Dame: Irish are at home Saturday to host Purdue.