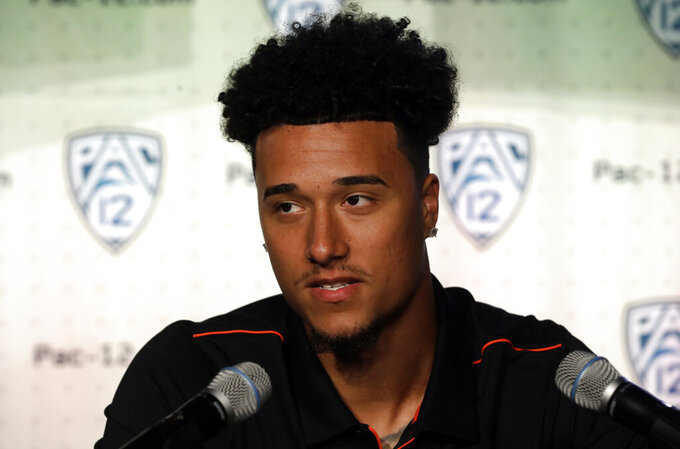 That's the theme for the Beavers as they embark on their second year under coach Jonathan Smith. The team is looking for a turnaround after going 2-10 in Smith's debut season.

"I think that all the juniors and seniors, they just want to get this thing going in the right direction, so when we leave out of here we've got this program heading in the right way," quarterback Jake Luton said. "And if we can come out of here a bowl-win team, that's all the better."

"We're just focused on getting better each and every day," he said. "Obviously as a senior, and the experience I've had here, my ultimate goal is to reach a bowl game, which we haven't done since I've been here. But as for the rest of the team, the mindset of the team, we're just focused on improving every day and getting better each and every day in every area we can."

Smith, a former quarterback for the Beavers, returned to Corvallis last season after a stint as quarterbacks coach for Washington under Chris Petersen. Smith's two victories last year were double what the team had the season before.

"I want to see us play improved football from Game 1 to Game 12," Smith said. "I think it's realistic to watch us and see us compete down in and down out, and compete for four quarters."

The Beavers return Jermar Jefferson, one of the best running backs for Oregon State since Jacquizz Rodgers. Jefferson rushed for 1,380 yards last season, a school record for a true freshman, with 12 touchdowns. He averaged 115 yards rushing to rank among the top running backs in the nation, and was named the Pac-12 Offensive Freshman of the Year.

The team also returns Luton, who was awarded a sixth season of eligibility after a career marred by injury. Luton passed for a team-high 1,660 yards and 10 touchdowns last season despite missing four games with a concussion and a high ankle sprain.

He'll get competition in camp from Tristan Gebbia, a transfer from Nebraska who was the Beavers' scout team quarterback last season.

"I think the media loves the competition thing," Luton said. "For good reason, it's a better story than not a competition. And that's fine. But I think, day in and day out, the guys that we're competing against, we're friends, we like each other, we want the best for each other. We all want to be on the field, but there's no heated competition between each person."

Oregon State's defense is the biggest question mark. The Beavers defense did not hold a conference opponent to fewer than 500 yards last season and gave up an overall average of 45.7 points and 536.8 yards per game.

The defensive staff spent time at LSU in the offseason with Tigers defensive coordinator Dave Aranda.

One key addition is Jordan Whittley, a 6-foot-2, 338-pound senior defensive lineman who has one year of eligibility remaining after transferring from Laney College.

"Year 2, a whole lot of things feel better," Smith said. "Watching these guys in the weight room. Having continuity on our staff, having 9, 10 guys coming back for their second year. Reiterating some of the scheme we're running but knowing these players even better, the players themselves knowing the coaches better into Year 2. Just very optimistic of the progress that we've made so far, and I know we've still got work to do pushing into the season."