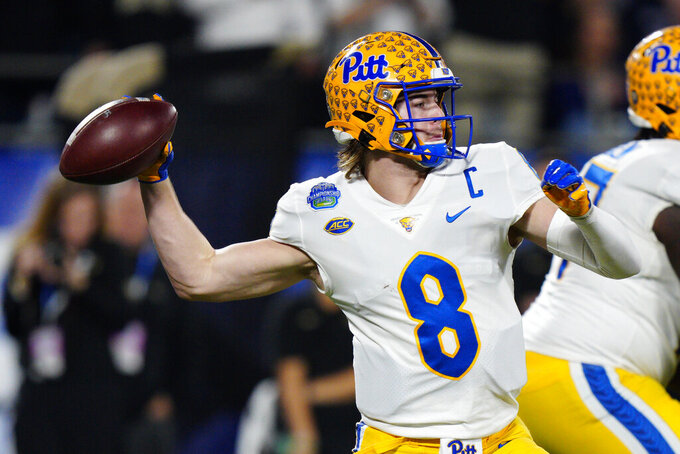 CHARLOTTE, N.C. (AP) — Pittsburgh’s Kenny Pickett has the records — and now he has an Atlantic Coast Conference championship to go along with them.

Pickett’s ascent to a likely Heisman Trophy candidate and a prospective first-round NFL draft pick took another big step forward as he threw for 253 yards and two touchdowns and ran for a 58-yard score, helping Pittsburgh defeat Wake Forest 45-21 on Saturday night and giving the Panthers their first ACC title.

“Kenny means everything to this program,” Pitt coach Pat Narduzzi said. “He didn’t come back to win the Heisman, but he should. He came back to Pittsburgh to win a championship and this is a dream come true. I couldn’t be happier for number eight.”

Along the way, Pickett set two passing records on a historic night.

Pickett’s first touchdown pass of the game, a 22-yard toss on a swing pass to Rodney Hammond in the first quarter, broke Dan Marino’s school record of 79 career TD passes. He now has 81 for his career.

Pickett’s second TD pass, a 4-yard toss to Jared Wayne in the second quarter on a slant route, established an ACC record for touchdown passes in a season with 42, eclipsing the mark of 41 set by Clemson’s Deshaun Watson in 2016.

Wake Forest coach Dave Clawson was impressed seeing Pickett on tape leading up to the game, and even more so after watching him play in person.

“Kenny Pickett is a winner,” Clawson said. “He is a great competitor with physical skills. He appears to have all of those intangible qualities that make a quarterback great. And I certainly have great admiration for how he plays the game. I have a ton of respect for him. He earned this thing — the player of the year and now the championship.”

After the game, Pickett broke down the team in the locker room by shouting “ACC champs!”

Pickett said he returned to Pittsburgh — his self-described “second home” — for the sole purpose of winning a title.

“I love the city of Pittsburgh," Pickett said. “It's the city of champions and I wanted to bring one home.”

By midway through the fourth quarter, Pitt fans were chanting “Kenny Heisman.”

Alabama's Bryce Young is considered the heavy favorite to win the award, especially after he led the Crimson Tide to a big win against No. 1-ranked Georgia in the Southeastern Conference championship game earlier Saturday. But Pickett will get some consideration, something few expected when the Panthers were picked to finish fourth in the ACC's Coastal Division at the beginning of the season.

The recently named ACC Player of the Year got a huge assist Saturday night from his defense, which made adjustments in the second quarter and held the Demon Deacons scoreless on their 13 offensive possessions after spotting them three touchdowns and a 21-14 lead to open the game. The Panthers defense intercepted Sam Hartman four times and sacked him five times.

Pickett displayed all of the qualities of an NFL prospect, showing a strong arm to make difficult throws on out-routes, quality decision making and the ability to make plays when the pocket breaks down.

He also showed he has some tricks up his sleeve.

On the game's opening possession, Pickett escaped a pass rush and ran for a first down. As a defensive back approached, Pickett faked as if he was going to slide, but then stayed on his feet and ran another 40 yards for a touchdown, igniting the Pitt crowd.

“It was intentional,” Pickett said of the fake slide. “I just kind of started slowing down and pulling up and getting ready to slide and I just kind of saw their body language and they just pulled up as well. So I really don't know. I have never done that before.”

Pickett relied heavily on his favorite receiver Jordan Addison, who finished with eight catches for 126 yards. Addison entered the game with 17 TD catches for the nation's fourth-highest scoring offense.