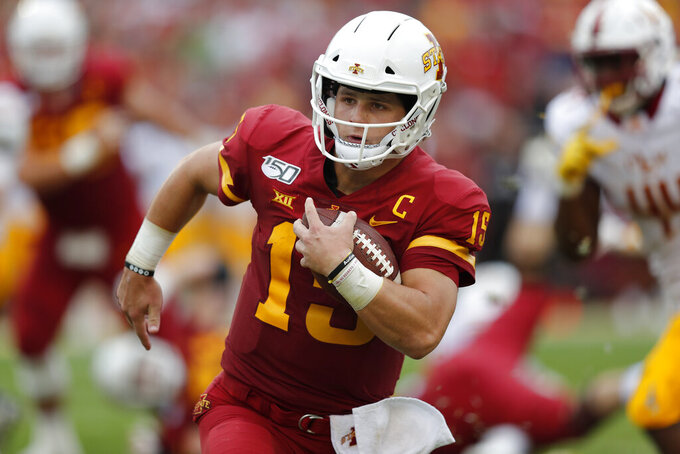 RETRANSMISSION TO CORRECT DATE - Iowa State quarterback Brock Purdy runs the ball for a first down against Louisiana-Monroe during the first half of an NCAA college football game, Saturday, Sept. 21, 2019, in Ames, Iowa. (AP Photo/Matthew Putney)

Sophomore Brock Purdy gave the Cyclones the jolt they were looking for with one of the best individual performances in school history.

Purdy threw for a career-high 435 yards and tied a school record with six touchdowns and Iowa State throttled Louisiana-Monroe 72-20 on Saturday, its best scoring output in 113 years.

"Our offense clicked, the receivers were great, offensive line did amazing," Purdy said. "It just happened. It's not something I go into the game thinking (about) records. As long as we're winning, I'm totally fine."

Purdy tossed three touchdown passes and ran for 75 yards and three TDs for the Cyclones (2-1), becoming the first player in school history to surpass 500 yards of total offense.

Purdy wasn't the only once piling it on against a ULM team that took Florida State to overtime in its opener.

Iowa State finished with a school-best 714 yards and scored its most points since beating Cornell 81-0 in 1906 — the same year the forward pass became legal.

Purdy and the Cyclones broke free in the second half, pushing a 14-point halftime lead to 48-20 with three touchdowns in the third quarter.

Purdy ran it in from 13 yards out, found Deshaunte Jones for an 84-yard TD connection and hit Sean Shaw from 12 yards out to make it a 28-point game with 19 seconds left in the third.

Purdy racked up 510 total yards despite sitting out the fourth quarter. Tarique Milton had 142 yards receiving for the Cyclones, and Jones had 100 on just two grabs.

"We played like a football team for the first time this year," Iowa State coach Matt Campbell said. "You felt like we were playing off each other. When we play special teams, offense, defense and flow, you have an opportunity to be ... really good."

Caleb Evans threw for 176 yards and two TDs and ran for 93 yards for ULM (1-2). The Warhawks allowed 45 points in the second half, the same total it gave up in four quarters and overtime against the Seminoles.

Iowa State: Entering play, Iowa State's 15 points a game in regulation would've ranked 125th out of 130 FBS schools. The Cyclones snapped out of their funk with authority, as Purdy found both opened and seemingly covered receivers with ease. Iowa State's defense didn't have a great day, but for once the offense picked it up.

ULM: The Warhawks forced Purdy to throw a pick and fumble the ball away in Iowa State territory in the first five minutes — and got zero points out of either turnover. That's not a formula for success when you're on the road against a Power 5 opponent. Iowa State responded by scoring on 12 consecutive drives.

IS RE-AL FOR REAL?

Iowa State backup quarterback Re-al Mitchell got the first extended playing time of his career, and he flashed promise with his feet. Mitchell closed out the scoring with a 29-yard TD run on third down, evading multiple defenders before cruising into the end zone. Mitchell ran for 65 yards on just four carries and his only completion, a 9-yarder to Shaw, went for a score. For a team still seeking a No. 1 guy at tailback, Mitchell looked like a difference-maker on the ground.

Bret Oberg also had six touchdowns for Iowa State, doing so against Oklahoma in 1989, and Joel Lanning, Troy Davis and Joe Henderson scored five touchdowns in a game for the Cyclones. Lanning did it three years ago in the Cyclones' 66-10 rout of Patrick Mahomes and Texas Tech. ... ULM finished with 425 yards and went 8 of 17 on third downs. The Warhawks found success when Evans pulled it down and ran with a potential punt looming. ... Jake Hummel, a freshman from powerhouse Dowling Catholic in West Des Moines, Iowa, returned an interception 48 yards for a touchdown.

"That guy's a gym rat. He's in here as much as our coaching staff in studying and detailing what it takes to be a great quarterback. Certainly he did some great things," Campbell said about Purdy.