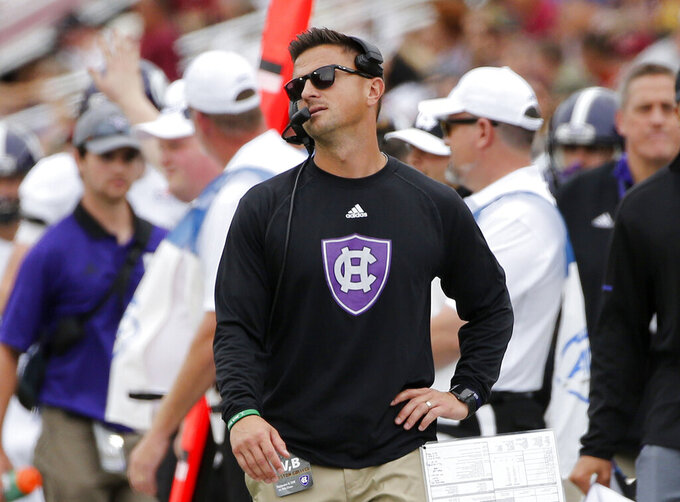 FILE - In this Sept. 8, 2018, file photo, Holy Cross head coach Bob Chesney reacts on the sideline during the first half of a college football game against Boston College in Boston. Holy Cross plays at Navy on Saturday. (AP Photo/Mary Schwalm, File)

ANNAPOLIS, Md. (AP) — Navy head coach Ken Niumatalolo has made sweeping changes in the wake of a dismal 2018 season that ended with a disappointing 3-10 record,

He shuffled his coaching staff, revised his stance on the quarterback position and, most surprisingly, added a wrinkle to an offense that has long relied on the good old triple option.

The result of the overhaul will be on full display Saturday when the Midshipmen open at home against Holy Cross.

Not long after Navy finished with a loss to Army last December, Niumatalolo cleaned house on the defensive side of the ball. Veteran coordinator Dale Pehrson was pushed into retirement and replaced by Brian Newberry.

Newberry was lured away from Kennesaw State and brought two trusted assistants along with him. Brian Norwood, who served as defensive coordinator at Baylor, Tulsa and Kansas, is among five new defensive assistants at Navy.

Prior to spring camp, the 12th-year head coach reinstated Malcolm Perry as the starting quarterback. Niumatalolo acknowledged made a mistake by switching Perry to slotback midway through last season, because the offense wasn't any better with Zach Abey or Garret Lewis at quarterback.

The plan iis to showcase Perry's speed, moves and athleticism by getting him out in space as much as possible.

Some other things to know about the matchup between Holy Cross and Navy:

Newberry has installed a 4-2-5 defensive alignment that is designed to be multiple. Opponents can expect to see constantly changing fronts and a wide assortment of blitzes.

"We want to keep people off balance, we want to confuse guys up front and confuse quarterbacks. So we'll take advantage of changing from even to odd fronts," he said.

Linebackers Diego Fagot, Nizaire Cromartie and Jake Springer will be key figures in the new defense. Those three will be given opportunities to blitz from all angles with the intent of wreaking havoc.

Navy ranked dead last among 129 Football Bowl Subdivision schools in passing offense with an average of 73 yards per game.

"We've got to improve in the passing game. We can't have 11 defenders up on the line of scrimmage," Niumatalolo said. "Safeties don't even worry about the pass. Everybody is playing the run. We have to make people pay for doing that."

Niumatalolo performed an assessment of the top passing offenses in college football and settled on the run and shoot as the best fit for Navy.

Stutzmann, who played and coached in a run and shoot system at Hawaii, was hired to teach the offense to the Navy staff.

The Crusaders are confident after concluding the 2018 campaign on a four-game winning streak.

Holy Cross, under the direction of second-year head coach Bob Chesney, was picked second behind Colgate in the Patriot League preseason poll.

"I think things are going in the right direction. We're trying to establish a positive culture and I believe we've made a lot of progress," Chesney said.

This marks the first meeting between Navy and Holy Cross.

Roberts was recruited by Navy as a quarterback and did not see varsity action as a freshman before transferring. The 5-foot-9 senior is slated to return kickoffs and punts on Saturday.