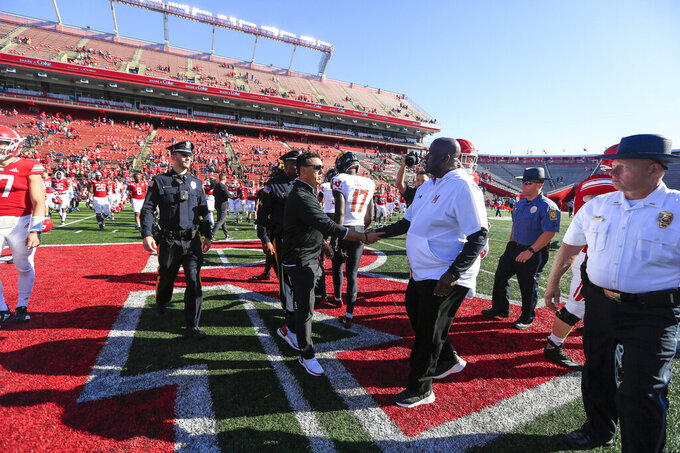 PISCATAWAY, N.J. (AP) — First, a coaching change four games into the season and now a couple of Rutgers players look like they have called it a season as well.

In order to remain eligible to redshirt, quarterback Art Sitkowski and running back Raheem Blackshear asked Rutgers interim coach Nunzio Campanile to not play against Maryland on Saturday. By not playing a fifth game, the two can take advantage of an NCAA rule implemented last year that allows players to compete in four games while still being able to preserve a year of eligibility.

"Am I disappointed by it? Incredibly. Do I understand it? I guess so. I guess that's the way the world is now," Campanile said after Rutgers lost 48-7. "I think that this is a game about your team, you know and it's about sacrificing personal accomplishment for the success of the team. But that's the world they live in and they have got a lot of people telling them, you know, worry about you, worry about you. I get it."

Campanile was elevated to interim coach after Chris Ash was fired four games into his fourth season with the Scarlet Knights (1-4, 0-3 Big Ten) last Sunday. Campanile announced the Sitkowski news after Thursday's practice. Blackshear's decision came later. Campanile said he could see Sitkowski (three games played) playing again this season, but he does not foresee Blackshear seeing the field again.

It is unclear Sitkowski and Blackshear plan to transfer or stay at Rutgers.

Last season, Clemson quarterback Kelly Bryant took advantage of the rule after losing his job to Trevor Lawrence, leaving the eventual national champion Tigers four games into the season. Bryant transferred to Missouri and is the starter this season.

Just two weeks ago, Houston quarterback D'Eriq King and wide receiver Keith Corbin shut it down after a 1-3 start. King has said he plans to stay at the school and play for coach Dana Holgorsen next year.

Sitkwoski, a highly touted recruit who lost his starting job to graduate transfer McLane Carter (concussion) in training camp, had started the previous three games. The sophomore has completed 52% of his passes for 1,587 yards, five touchdowns and 20 interceptions in his career.

Blackshear is Rutgers' best offensive skill player. He had 586 yards rushing and 44 catches for 367 yards for 1,136 all-purpose yards in 2018. Blackshear had 88 yards rushing on 29 carries and 29 receptions for 310 yards and two touchdowns through four games this year.

Both Sitkowski and Blackshear were suited up Saturday. Neither was made available to the media by Rutgers following the game.

"It's a brotherhood, I support both Art and Blackshear," said senior captain Zach Venesky, who left the game early with an injury and was in a walking boot postgame. "And if you look on the sidelines, there are two guys who are cheering on and they're being supportive and stuff like that, and that's what it's all about. We support them."

Campanile said he doesn't foresee any more players asking for an unplanned redshirt.

The Scarlet Knights have not won a Big Ten game since 2017 and have a 17-game losing streak against Power Five opponents.

"We just got to stick together and play for each other because we're all we got right now," Johnny Langan, who made his collegiate debut at quarterback for Rutgers, said. "So whoever's with us, we'll take that and we'll play as hard as we can."