Schools debate whether to detail positive tests for athletes 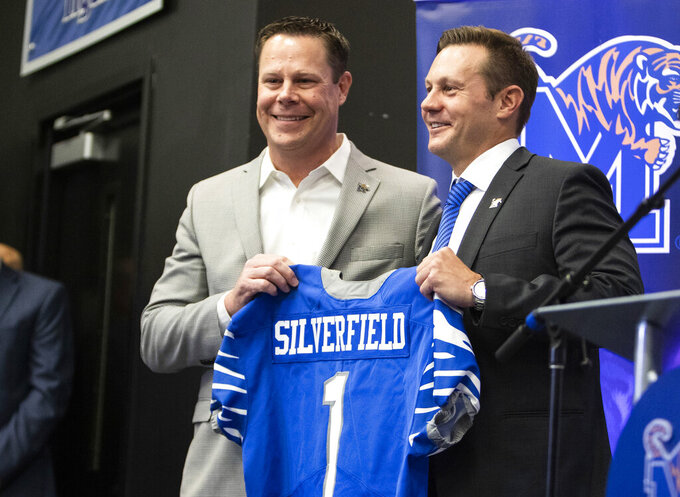 FILE - In this Dec. 13, 2019, file photo, Memphis director of athletics Laird Veatch, left, presents Memphis head football coach Ryan Silverfield, right, with a team jersey in Memphis, Tenn. As football players start returning to campus, college officials have a wide range of opinions on whether to let the public know how many of their athletes test positive for coronavirus. Just over half of the 64 Football Bowl Subdivision members that responded to an Associated Press survey said they were still deciding whether to announce the number of student-athletes with positive tests.(Ariel Cobbert/The Commercial Appeal via AP, File)

Over the past two weeks, as college athletes have returned to campuses to work out and prepare for sports later this year, a handful of them have tested positive for the coronavirus.

Just how many positive tests isn't known, however, because college officials are debating exactly what to tell the public. Nearly half the 66 Football Bowl Subdivision members that responded to an Associated Press inquiry last week said they were still deciding whether to disclose the number of athletes with positive tests — and just over half aren’t going to release numbers at all.

“That’s a real challenge,” Memphis athletic director Laird Veatch said. “A lot of us in the profession are trying to work through that. That’s why I think you’ve seen quite a bit of inconsistency across the country in terms of what’s been announced and what hasn’t.”

The inconsistency has been apparent since football players began returning to campus this month for voluntary workouts. Auburn confirmed three players had tested positive; a few days later, rival Alabama declined to confirm reports that as many as eight were positive, citing privacy laws. Boise State said only that a number of athletes had tested positive without providing details.

Arkansas State announced June 4 that seven athletes from three different sports had tested positive for COVID-19 and were self-isolating for 14 days.

“We would have made the same kind of announcement if it had not involved student athletes,” Arkansas State chancellor Kelly Damphousse said in a statement. “Our announcement reinforced the message that our governor had recently shared: Young people are not immune to COVID-19 and you may be infected without realizing it. ... To be transparent, we felt comfortable in acknowledging these positive tests came from our returning student-athletes, as they were the only students who were being tested that week.’’

Other schools weren’t as transparent. They’re disclosing the number of positive tests only to public health officials. Syracuse is one of the schools in that group.

“We’re going to do everything we can to respect and protect the privacy rights of our student-athletes while at the same time understanding your colleagues, this is a news item for you, and we’re trying to arrive at the right space and the right way to do both,” Syracuse athletic director John Wildhack said.

Athletic programs sometimes avoid making formal injury announcements, citing the Health Insurance Portability and Accountability Act (HIPAA) or the Family Educational Rights and Privacy Act (FERPA). Both are designed to protect the privacy of an individual’s health records. The U.S. Education Department issued guidelines in March that said a school shouldn’t disclose personal identifiable information from student education records to the media even if it determines a health or safety emergency exists.

But is merely revealing a number going to enable anyone to identify which athletes tested positive? That’s up for debate.

Amelia Vance is the director of youth and education privacy at the Future Privacy Forum, a think tank dedicated to data privacy issues. Vance believes releasing the number of positive tests effectively informs the public without sacrificing privacy.

Vance said disclosing the number of positive tests for a certain team would help notify members of the general public who may have come into contact with the athletes and could serve as a guide to those schools that haven’t welcomed students back to campus yet.

“If you’re saying six students tested positive or a student was exposed and therefore we’re having the whole team tested or things like that, that wouldn’t probably be traced back to an individual student,” Vance said. “Therefore, neither (FERPA or HIPAA) is going to apply, so any claim that privacy laws wouldn’t allow that disclosure would be disingenuous.

“The key there is to balance the public interest with the privacy of the students," she said. "Most of the time, the information colleges and universities need to disclose don’t require the identification of a particular student to the press or general public.”

Florida State has announced at least one athlete had tested positive for coronavirus, but athletic department spokesman Rob Wilson said the school didn’t release an exact number out of concern that might make it “fairly easy to identify who.” Texas Tech said it had positive cases within its men’s basketball program but didn’t reveal the number due to privacy concerns.

Middle Tennessee athletic director Chris Massaro said his school won’t release any numbers until everyone’s back on campus, and it will then note the entire number of students who tested positive without saying how many were athletes. Appalachian State also plans to announce the total number of positive tests without differentiating athletes from the general student population.

As for Memphis, Veatch said none its football players had tested positive yet, giving officials time to decide how to proceed.

“In the future we’re going to have to work through that and really try to balance student-athlete rights with public health and safety,” Veatch said. “We’ll find a way to do that, but we haven’t determined exactly what that’s going to look like yet.”