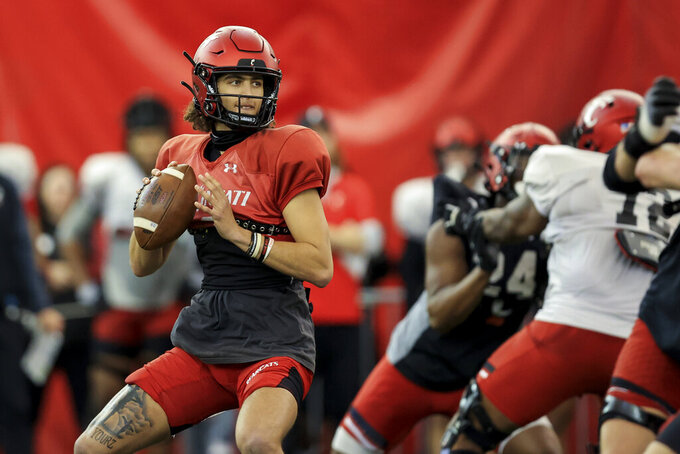 The Big 12 is skimming the cream off the top of the American Athletic Conference next season, shifting the landscape for a second-tier conference that has struggled for a measure of national respectability.

Last year's AAC champion, Cincinnati (13-1, 8-0 AAC), became the first school outside a major conference to reach the College Football Playoff. Runner-up Houston (12-2, 8-0) beat Auburn in the Birmingham Bowl and finished No. 17 in the country. Central Florida (9-4, 5-3) took down Florida in the Gasparilla Bowl.

All three will make the move to the Big 12 in 2023. First, though, they are expected to finish top of the table in their final AAC campaign.

Behind transfers and established upper-classmen, Cincinnati had a lightning-in-a-bottle 2021 season and made the CFP, only to lose to Alabama in a semifinal.

“We lost a lot of big-time players and players that have been here for a long time,” Cincinnati coach Luke Fickell said. “I say that life without Desmond Ridder and Coby Bryant is different, but I think that sometimes players in their own way are really excited about proving who they are and what they have done as leaders.”

No. 23 Cincinnati will try to replace Ridder, one of the nation’s top QBs a year ago, with Ben Bryant, who was Ridder’s backup for two seasons before playing at Eastern Michigan last season, or sophomore Evan Prater. The Bearcats ended fall camp without declaring a starter.

The uncertainty is reflected in the AAC preseason media poll that picked Houston to finish No. 1 over Cincinnati by a single point (243-242).

“I doubt they were relying on just those guys within their program,” Holgorsen said. “They probably have some good players behind them. They haven’t lost a game in the conference in the last couple of years, so (Cincinnati) is going to have to be my pick. They are setting the standard for what it takes to win in the American.”

No. 24 Houston has one of the more experienced quarterbacks in Clayton Tune, a fifth-year player who completed more than 68% of his passes and threw 30 touchdowns in 2021. He has started 30 college games.

“I’ve always believed in Clayton," Holgorsen said. “I think he’s one of the best quarterbacks in the country, no doubt. Probably the biggest key is we got better pieces around him right now."

Tune's weapons include Nathaniel Dell, who was one of the nation's top receivers last year.

At least seven other experienced quarterbacks are set to lead AAC squads in 2022: Holton Ahlers at East Carolina; Seth Henigan at Memphis; Davis Brin at Tulsa; Michael Pratt at Tulane; Tai Lavatai at Navy; D’Wan Mathis at Temple; and Tanner Mordecai at SMU.

Making the AAC more unpredictable is the number of new players coming to the teams via the transfer portal.

SMU, South Florida, Central Florida and East Carolina brought in at least a dozen new players via the portal. UCF coach Gus Malzahn noted that eight of the 16 transfers coming to Orlando left Southeastern Conference schools to do so.

The AAC has two new coaches in 2022. Rhett Lashlee takes over at SMU for Sonny Dykes, who moved on to the head coaching job at TCU. Lashlee returns to Dallas after serving as the SMU offensive coordinator in 2018-19 before moving to Miami. Stan Drayton takes over at Temple after spending the last five seasons as the running backs coach at Texas.

ONLY CONSTANT IS CHANGE

All the realignment leaves smaller conferences with a more uncertain competitive and economic landscape.

The AAC in 2023 is replacing its three top teams with a half dozen mid-majors imported from Conference USA.

“We can lament realignment all we want, but we have to deal with it,” Aresco said. “The realignment we have seen is of course driven by money and competitive positioning.

“We all know this a new and challenging era in college sports, unlike any that we've ever experienced,” he said. “These are unsettling times.”