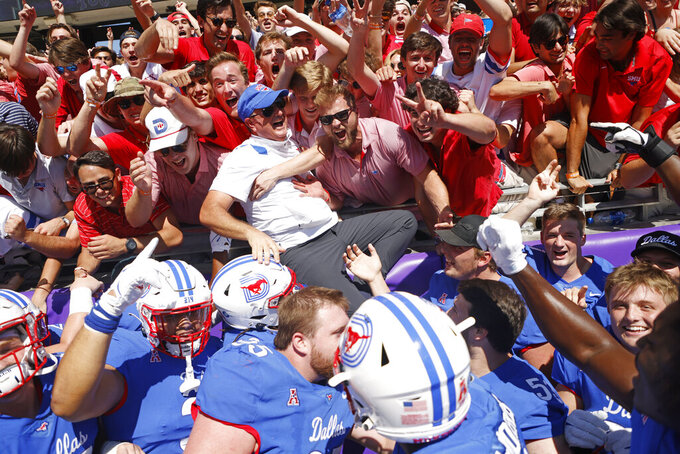 FORT WORTH, Texas (AP) — TCU coach Gary Patterson said assistant Jerry Kill sustained a concussion when he got knocked down during a postgame scuffle after a home loss to SMU over the weekend and accused his opponent of plotting a provacative flag planting at midfield.

Patterson insisted Tuesday that Kill would not have been knocked down had Mustangs players not been trying to plant their school flag.

“He got hit twice ... I cannot substantiate that it was a SMU or TCU person, but it did happen. If we wouldn’t have had the flags, it wouldn’t have happened,” Patterson said during his weekly news conference.

Kill, the former Minnesota head coach who was the best man in his wedding, had a two-inch knot and scrapes on the back of his head, Patterson said.

In his postgame remarks after the 42-34 loss on Saturday, Patterson initially indicated he believed Kill was hit with a helmet by an SMU player. He said Tuesday that he couldn't substantiate if that happened.

Hart, however, said there was no evidence after a thorough review of available video of anyone from SMU being involved with Kill getting hurt.

“I have spoken with TCU Athletics Director Jeremiah Donati and we agree that there is no evidence to support Coach Patterson’s initial claims. To that end, I was assured any insinuation that this occurred would be ‘walked back’ by Coach Patterson during today’s press conference,” Hart said.

At least one video posted on social media appears to show the 60-year-old Kill getting inadvertently getting knocked over by TCU players in the scuffle.

Hart said Patterson's claim that planting the flag had been planned was “a complete fabrication. I can state unequivocally that there was no such plan.”

Video showed SMU receiver Rashee Rice running to midfield with a flag displaying the Dallas school’s “D” logo before he was ushered away from the TCU logo by opposing players. A short time later, Mustangs defensive back Brandon Crossley tried unsuccessfully to plant the flag before tossing it. TCU players then pulled the flag off the pole, and a player angrily threw the pole at the ground.

Rice, who went to high school near Fort Worth but wasn't offered a scholarship by TCU, made headlines the week of the game by saying he thought TCU was afraid to play the Mustangs.

Coach Sonny Dykes, who was an offensive analyst on Patterson’s staff before taking the SMU job in 2018, apologized in his postgame comments Saturday for what his players did with the flag.

Hart said Dykes and his team “have my full support.”

“This activity was spontaneous and borne out of emotion,” Hart said. “To suggest otherwise is irresponsible and offensive. I will not allow Coach Dykes, our program or our student-athletes to be unjustifiably attacked. Sonny is a tremendous leader and a man of great integrity.”

It was the 100th meeting for the former Southwest Conference rivals, and the first time since 1992-93 that SMU had consecutive wins in the series. The Mustangs also won in 2019 before last year's scheduled game wasn't played because of the pandemic.

Kill joined TCU as a special assistant to Patterson in February 2020, a role overseeing the offense but not as an on-field assistant coach. He had a similar role at Virginia Tech before that. Kill was Minnesota's coach from 2011-15 before seizures caused by his epilepsy forced him to step down. He retired from on-field coaching after spending 2017 as offensive coordinator at Rutgers.

Patterson said Kill threw up after going home Saturday and went through concussion protocol. Kill was able to return to work with the Horned Frogs preparing for their Big 12 opener Saturday at home against Texas.