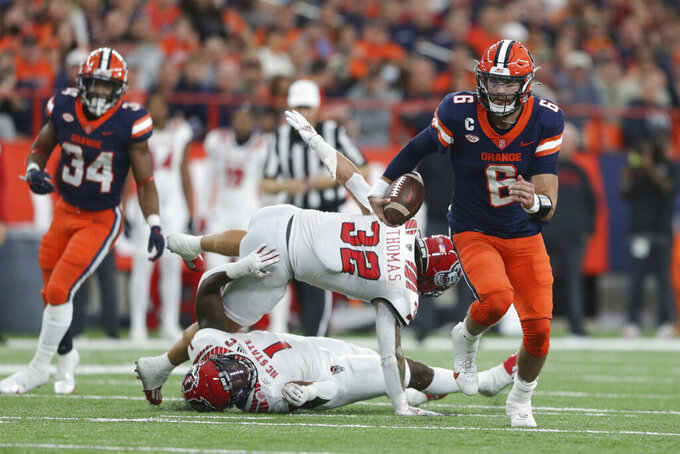 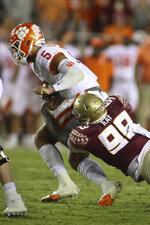 Here are things to watch in the Atlantic Coast Conference in Week 8:

Possibly the last hurdle for the Tigers as they pursue another Atlantic Division title, having already beaten the other division contenders. Clemson also can set a record for longest home win streak in league history; it's tied with Florida State at 37. Syracuse is 6-0 for the first time since 1987 and strong on both sides of the ball. QB Garrett Shrader and RB Sean Tucker are as good a 1-2 punch as anywhere, and the defense ranks sixth nationally, allowing just over 13 points per game, and eighth nationally, allowing just 268.8 yards per game.

The Tigers hold an 8-2 edge in the series and Saturday's game will mark the eighth time in the 11 meetings that they enter the game with a top-five ranking.

It will mark the first time in the past four meetings that the game is played in Kentucky. The Panthers, winners in six of the last seven matchups, including the last two, haven't been to Louisville since 2011. Both teams are coming off a bye week, which enabled the Cardinals to get QB Malik Cunningham back after missing a game while in the concussion protocol. He'd started 40 straight before being sidelined. The Panthers have a dynamic offensive force, too, in RB Israel Abanikanda, who likely needed the bye to recover from a 320-yard, six-touchdown performance against Virginia Tech.

Boston College (2-4, 1-3) has won its last three trips to Winston-Salem but the last one came in 2018 and No. 13 Wake Forest (5-1, 1-1) doesn't figure to be all that hospitable this time around. The Demon Deacons won 41-10 last year in Massachusetts to clinch the division title. They can achieve bowl eligibility with their third straight victory in the series.

Win or lose, Miami QB Tyler Van Dyke is lighting it up. One week after throwing for 496 yards and three TDs in a 27-24 loss to North Carolina, he threw for 351 yards and two TDs as the Hurricanes beat Virginia Tech 20-14 He's third in the league, averaging 276 yards per game, and has nine touchdowns and just four interceptions.