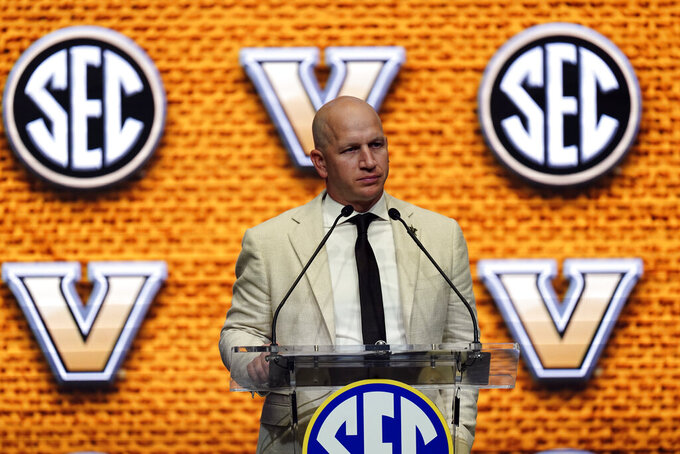 FILE - Vanderbilt coach Clark Lea speaks during Southeastern Conference football media days July 19, 2022, in Atlanta. Lea went 2-10 in his debut season, including losing all eight SEC games. Lea understands only too well that he has a big building job ahead of him at his alma mater. (AP Photo/John Bazemore, File)

NASHVILLE, Tenn. (AP) — Vanderbilt coach Clark Lea understands he has a major building job ahead of him at his alma mater.

If he didn't, his debut season made that clear.

The Commodores went 2-10 last year, including going winless inside the Southeastern Conference. Lea has compared 2021 to stripping the program down to the studs, and his first full recruiting class is first step toward creating what he wants. That 30-player class was slotted 32nd by the 247Sports composite rankings.

“We fell way short of our expectations,” Lea said. “But we are simply trying to build the best version of Vanderbilt football in year two independent of our opponents. We think if we can reach that level of championship performance within this team, that replicated over time we’re going to have a lot of success. That’s our focus. That will continue to be our focus.”

The smallest and only private school in the SEC also has started renovations that will lead to the first real makeover of the football stadium since 1981 once this season ends.

The Commodores take a 21-game skid inside the Southeastern Conference into this season. They haven't beaten a SEC team since downing Missouri on Oct. 19, 2019. That drought seems certain to grow at least by one with Vanderbilt opening the SEC slate against Alabama on Sept. 24, a team the Commodores haven't beaten on the field since 1984.

Lea is claiming only the last eight losses in that skid, though said the streak is not something the team talks about.

“We’re not fighting to win an SEC game, we’re fighting to become a dominant force within the conference,” Lea said. “Obviously winning in the SEC requires winning that first game. But when that happens, it’s not going to be a huge celebration."

Lea announced at SEC media days in July that Mike Wright is Vanderbilt's starter, taking advantage of the junior's legs.

Wright had Vanderbilt's best rushing game last season as he ran for 152 yards in a loss to Missouri, including a 70-yarder on one carry. Ken Seals also is back after starting as a freshman in 2020. He threw for 1,181 yards with five touchdowns and eight interceptions. Wright threw for 1,042 yards last season appearing in 10 games with eight TDs and six interceptions.

“It’s all about moving the ball,” Lea said. “One way to do that is with a mobile quarterback. Mike Wright is one of the best in the country in that respect.”

The Commodores have some familiarity going into their second straight season with coordinator Joey Lynch running the offense, Lynch also has lots of returning players to help rev up an offense that ranked 128 out of 130 scoring just 15.8 points a game and outscored in every quarter for the season.

Wright has tight ends Ben Bresnahan and Gavin Schoenwald back along with Will Sheppard and Devin Boddie, two of their top four receivers last season. Rocko Griffin, Wright, Patrick Smith and Re'Mahn Davis were Vandy's top rushers in 2021.

Luckily for Vanderbilt the Commodores have an easier slate of games to try and build some momentum before their SEC opener against Alabama.

The Commodores open the season Aug. 27 at Hawaii before hosting Elon and Wake Forest in consecutive weeks. Then they visit Northern Illinois before getting the first of two open dates to prepare for the meat of the SEC slate.