What To Watch: TCU-Kansas grab national spotlight in Week 6 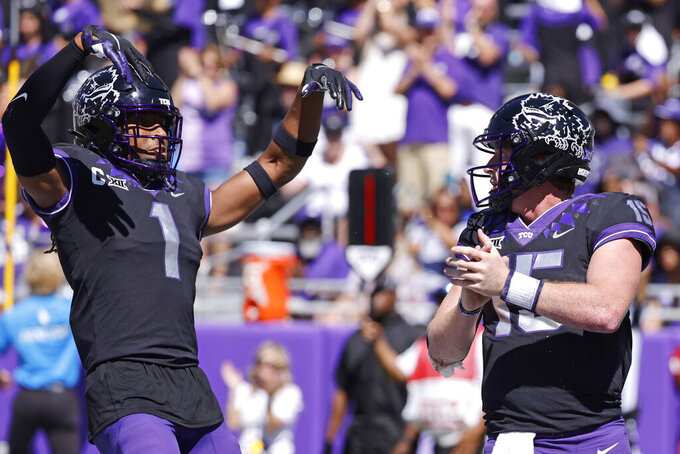 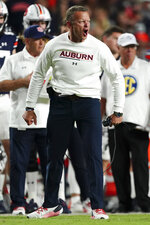 There’s a new No. 1 in college football, with Alabama and Georgia swapping places again.

But both SEC powers will yield some of the Week 6 spotlight to others this weekend, including newly ranked TCU and Kansas.

The top-ranked Crimson Tide and the No. 2 Bulldogs are playing games that don’t have nearly the hoped-for allure. Alabama is a favorite over unranked Texas A&M and the Bulldogs are expected to blow out struggling Auburn.

There are only three Top 25 matchups this weekend and the top seven teams are facing unranked opponents. But there are some intriguing matchups just the same.

No. 8 Tennessee visits No. 25 LSU’s Tiger Stadium, where the last three meetings haven’t been settled until the final play. No. 11 Utah is at No. 18 UCLA as both try to keep pace with No. 6 USC in the Pac-12.

No. 17 TCU and No. 19 Kansas meet in Lawrence as two of college football's surprise teams and ESPN's “College GameDay” will be on hand.

Not bad for two teams picked to finish in the bottom half of the Big 12 Conference (TCU, seventh; Kansas, 10th).

The Frogs, who last trailed 24 seconds into the second quarter of the opener at Colorado, have the nation's No. 2 scoring and total offense. Quarterback Max Duggan leads the nation in passing efficiency (202.2), throwing for 11 touchdowns without an interception.

Lincoln Riley’s Heisman Trophy touch with quarterbacks is perhaps surfacing again. USC’s Caleb Williams, who followed his coach from Oklahoma, is shaping up as a legitimate contender.

Williams rebounded from a subpar outing against Oregon State to carve up Arizona State. He completed 27 of 37 passes for 348 yards and three touchowns, though he did throw his first interception. Williams also ran for 44 yards and a TD.

Williams is completing 67% of his passes with 12 TDs and the lone pick. Riley coached Heisman winners Baker Mayfield and Kyler Murray at Oklahoma.

3 — Utah cornerback Clark Phillips III had three interceptions, including a pick-6, against Oregon State. It was the most interceptions by a single player in a game in FBS this season.

11 — Cincinnati tied an American Athletic Conference record with 11 sacks against Tulsa to take the national lead.

126 — Number of times Auburn and Georgia will have played after Saturday. Dating to 1892, it’s billed as The Deep South’s Oldest Rivalry.

242 — Number of rushing yards Alabama had in the fourth quarter against Arkansas, including three runs of 70-plus yards. That followed a third quarter when the Tide lost 4 yards on the ground.

Texas vs. Oklahoma at Cotton Bowl in Dallas.

The Red River Showdown is never really under the radar for the teams and fans, but this one certainly is from a national standpoint. It’s the first time neither team was ranked heading into this rivalry game since 1998.

Both teams are 3-2 while Oklahoma has dropped its first two Big 12 Conference games. Texas is 1-1 in the league. A big factor, especially for the Sooners: poor defense. Oklahoma ranks 109th nationally in total defense and 119th against the run. Texas is 90th in pass defense.

Oklahoma has won the last three meetings including a 55-48 victory last season.

The Tigers blew a 17-0 lead against LSU and haven’t scored a second-half point in their last two games. It’s a continuation of end-of-season struggles from his debut in a tenure that already was shaky after an offseason school investigation followed heavy departures among Harsin’s staff and players.